Katie is an expert chocolatier who hand-makes artisan chocolates using the finest couvertures and a range of exotic ingredients.

She wanted a story that would explain the origins of her business, set out her brand values and communicate her love for the art of chocolate-making.

Our writing aims to combine narrative clarity and personal emotion, while using synaesthetic language to evoke the deep sensual appeal of Katie’s chocolates. 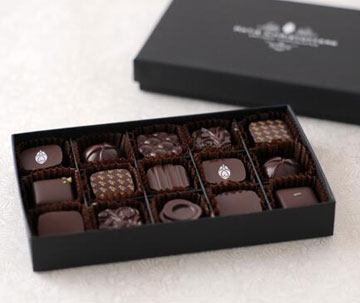 Communicate the history and values of the brand

I’ve always been fascinated by highly prized foods like tea, coffee and, above all, chocolate. Their tastes are so rich and complex, and vary so much by origin, giving each its own unique character.

Mass production gives us these foods in great quantity, but only true artisanship can reveal their quality. They demand commitment, and they reward it too. And, in their different ways, they’re all held sacred, with their own cultures, traditions and rituals around the world.

I was born in the US, and came to the UK in 2000 to study neurobiology at Oxford. But although I had plenty of scientific curiosity, I soon realised that I wanted to satisfy it in the kitchen rather than the laboratory.

The art of chocolate making brings together everything I love. First, there’s the pride of the artisan, who puts their craft and concentration into something really special. There’s the thrill of experimenting and discovering new flavours. And there’s the practical science of tempering chocolate in just the right way and perfecting the chemistry between carefully chosen ingredients.

So much chocolate in the shops is uniform, mass-produced and lifeless. It’s a product rather than a food, made to be consumed rather than eaten. Whether you’re buying it as a gift or for yourself, it just lacks that essential spark of personality.

I wanted to make chocolate where the character of every ingredient and the intention of the chocolatier would shine through, like the colours of a painting. Chocolate that would be blended, and eaten, with real thoughtfulness and enjoyment. Chocolate that was made to be loved, and made with love too.

Working in my kitchen, I began to experiment. I decided to work with the couverture chocolates of Michel Cluizel. Each one is traceable to a single plantation, giving it a distinct flavour and character. I also found inspiration in the cuisines of India and Asia, and considered how unfamiliar tastes like jasmine, cinnamon and green tea could complement the underlying character of specific couvertures.

After many hours spent blending and ‘listening’ to the chocolate, I arrived at beguiling new tastes like Vietnamese Cinnamon, Banana & Cardamom and Rosemary, Raisin & Walnut. Unlike some chocolatiers, I like to let my flavours sing. When I use an ingredient, you can taste it loud and clear.

I started selling my chocolates commercially in 2010. As it turned out, I wasn’t the only one hungry for something new. The Oscars of the food world, the Great Taste Awards, honoured me with two awards in 2010, seven in 2011 and 11 in 2012 – more than any other chocolatier.

My range is evolving all the time as I discover new tastes and textures. However, one thing that will never change is my commitment to making delectable and distinctive chocolate. Enjoy!

I had been agonising over writing the ‘About’ section of my website for ages and just couldn’t get it right. So glad Tom was there to lend a hand.

After a brief chat on the phone about myself and my business he was able to get at the heart of what I do and write a fantastic narrative for my website.

Couldn’t be more satisfied with his work and will definitely be asking for further copy work on my website.