At university, I would sometimes help friends with their essay writing, partly because I could type and I had a typewriter (remember them?) and partly because I could write. I never had any problem getting my own ideas down on paper, although the ideas themselves were nothing special, as evidenced by my average degree. But for many of the people I knew, translating thoughts into written words was a huge challenge. 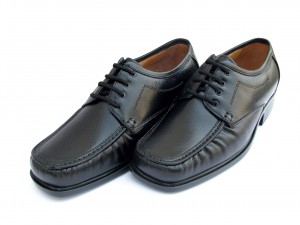 Your words, like your shoes, can be formal or informal – consider the impression you want to give

I’d often ask them to explain what they meant, and they’d reply with a perfectly clear summary of their thoughts. Then I’d suggest that they simply wrote down what they’d just said. And they would look at me blankly, or start laughing.

They were falling into the formality trap – the tendency to use jargon, long words and complex sentence construction out of a sense that the occasion demands it. Under pressure to perform, it’s tempting to reach for a tone that sounds ‘authoritative’ or ‘businesslike’. But if you’re not careful, you just end up confusing the audience – and perhaps yourself.

Do not boil or overheat as this will impair the flavour

They’ve gone now, but these words once appeared regularly on the soup tins of my youth. The usefulness of this copy depended on the reader understanding the word ‘impair’. Personally, I think that’s a big ask for the average Fine Fare customer. And why use the obscure ‘impair’ when you can use the everyday ‘spoil’? Presumably because it’s less impressive, too conversational. But who cares when there’s a risk of the customer ruining the product wrongly through wrong preparation, and never buying it again as a result?

Please enter the amount required as a multiple of £20

Once, a woman approached me near a cashpoint and asked me why she couldn’t withdraw £10. The screen was displaying these words, but the word ‘multiple’ didn’t mean a lot to her – quite understandably. Messages like this have now been replaced with something more like ‘This machine contains only £20 notes’, which is essentially what I said to explain the situation.

Often, the use of formal language is simply unthinking. The writer hasn’t stopped to consider what the audience needs. But it can also be a symptom of a kind of organisational insecurity or defensiveness – there’s a need or obligation to communicate, but a psychological incentive to stoppeople understanding. This is one of the key ways in which different types of work are turned into ‘professions’ – the practitioners develop a private language, or jargon, known only to them. Language is a curtain that stops outsiders seeing how the organisation works.

I recently received a letter from our local council informing me of a planning application for the ‘erection of single-storey self-contained dwelling unit’. I think this means that someone wants to build a ground-floor flat, but I can’t be sure. The effect of the language, deliberately or not, is to discourage involvement in the planning process – in theory, a social space.

The lesson for the copywriter? Use the simplest language that you can. That means short, commonly used words and short, simple sentences.