Ronseal’s ‘Does exactly what it says on the tin’ is one of the all-time great slogans. Interestingly, it doesn’t actually say anything specific to the product. But it works because the reader is either watching a bloke paint a door on a TV ad, or standing in a shop holding the aforesaid tin. 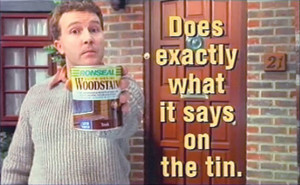 But what if the audience is in a situation where they don’t know what the product is? What if, to paraphrase that junior slaphead from The Matrix, there is no tin?

I recently spotted some on-vehicle copy that completely failed to say what the product actually was. (There are other issues, but I won’t dwell on them; Ryan Wallman elegantly dissects ‘Making a difference’ here.) 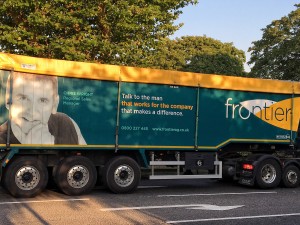 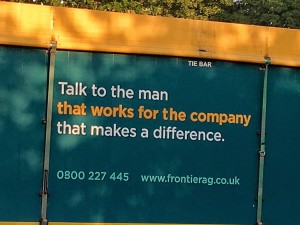 Text reads: Talk to the man that works for the company that makes a difference

A few days later, realising that I still wasn’t sure what the firm did, I wondered if others would react the same way. So I asked people on Twitter to guess. The four options were my own best guesses, based on the branding, the name and the involvement of a huge lorry. Only then did I click through to confirm that one of them was right. Take a stab yourself before you read on.

And the winner is…

Please help me with a blog post by guessing what this firm does (and RTing). Thanks!

The correct answer, farming supplies, limped home in third place with just 20% of the vote. To put that another way, 80% of people couldn’t work out what the firm did. And that was multiple choice – in the real world, you’d get no clues at all.

Presumably, response rates for on-vehicle branding are pretty much unmeasurable. So let’s use a common benchmark from direct marketing: 3% of lorry-viewers phoning up or visiting the website would be a good result.

But if only 20% of the audience even realise the ad is for them, the best you could hope for is 3% of 20%, i.e. 0.6%. That’s not a great return on the investment that went into putting this message out there.

Was the obscurity deliberate? Fiona Campbell-Howes of Radix thought it might be.

@tomcopy It does. But maybe only to pedants like us 🙂 I guess the copy is supposed to pique interest and make you go to the website ^FCH — Radix Communications (@radixcom) September 16, 2016

If so, I think the strategy is misguided. ‘Hey, that message could be relevant to me, I’ll visit the website and find out’ seems a highly unlikely thought process. Conversely, ‘I need that, I’ll remember the brand name and Google it later’ is still unlikely, but at least it’s plausible. It’s a mistake to expect other people to act in ways you never would yourself.

People aren’t advert Sherlocks, eagerly seeking out new brand mysteries to solve. They’re cognitive misers: busy, distracted and probably irritated by the mere presence of your ad. Unless you give them something interesting, they’re going to walk. And in B2B, ‘something interesting’ means ‘tangible benefits, clearly expressed’.

At the other extreme, consider the on-van copy used by Olleco. 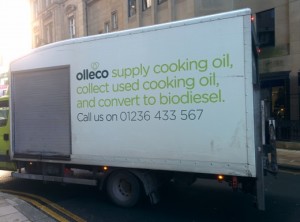 Copywriter Chris Kenworthy has already eulogised this copy here. I agree with everything he says, and I’d add that the simplicity is the right approach because the service is novel and relatively complex, in the sense of having three distinct stages that need to be explained.

Imagine spot-testing this copy. You stop someone, point to the van and ask them what the firm does. ‘Er, supply cooking oil, collect used cooking oil, and convert it to biodiesel?’

The copy is perfectly transparent and, within its brief, unimprovable. And it could so easily have been ‘Making a difference through catering and green energy solutions’.

I’ve worked on a lot B2B websites. Most B2B firms don’t have a flashy tagline for their brands, and they don’t need one. What they do need, prominent on the home page, is a simple factual description of what they actually do.

Many visitors will be completely new to the firm, with no idea whether it does what they’re looking for. They may be sourcing a service that’s new to them – so new that they don’t know what it’s called, or even whether it exists.

That’s why the smart B2B firm sets up an unequivocal signpost telling people they’re in the right place. Because if they don’t get it, there are nine more results waiting on the Google search they just left. 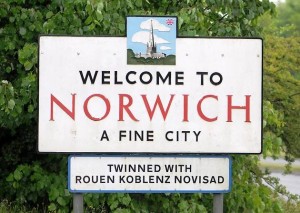 You talking to me?

‘Is that all there is?’ you ask. ‘Just saying what it does on the tin?’ No, of course not. There will be many times when something less direct is appropriate. Particularly when the audience already knows the product, which happens a lot in B2C.

However, in B2B particularly, you should always start with Olleco’s clarity about what’s on offer. Then you can branch out – as long as you don’t lose that clarity.

Many great ads use intrigue, but you always know what they’re for. If you didn’t, they’d be hot-air balloons without baskets, soaring to creative heights without taking any passengers along.

You probably can’t believe I’ve squeezed a thousand words out of ‘say what the product is’. But as my example shows, B2B work does fall at this first hurdle – probably because it’s made in an ivory tower, without thinking about the audience and their situation (let alone actual testing).

All it takes to guard against this is to put yourself in the reader’s shoes, and remember that job one is to explain why you’re even talking to them in the first place. Do that, and you really could make a difference.