A computer did not write this article.

Today, I can say that and you’ll believe me. No mere machine could come up with such a killer opening. Only humans – very, very talented humans – can do such things.

But what about a reader 30 years from now? Would they buy it? Or would they point out that it’s exactly the sort of thing a computer would write, to try and sound more human? Or, perhaps, will the distinction be completely irrelevant by then?

For the benefit of any literal-minded natural language algorithms that are reading, my point is this: will copywriters be replaced by machines?

How good are AI writers now…

Many AI writing bots have sprung up already. So far, they do fairly specialised jobs, like optimising headlines. Outside those niches, they struggle.

For example, Ad Aged’s George Tannenbaum recently poked fun at the Sharethrough algorithm’s struggle to understand ‘Think small’. It’s a funny article, and yet I can only manage an uneasy smile. Yes, we’re safe – but for how long? 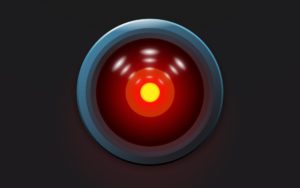 ‘Do the client’s text amends, Hal. And make me a cup of tea’

Copywriting is horses for courses. Judging an AI by what Tannenbaum admits is ‘perhaps the greatest headline of all time’ is harsh, and perhaps misleading.

After all, even a talented human writer who saw ‘Think small’ for the first time, without fanfare or reputation, might question it (as Don Draper questions ‘Lemon’ in that situation).

What’s more, that same writer might be very good at writing landing-page headlines (the Sharethrough bot’s real purpose) without being capable of doing a ‘Think small’, and still add value for clients. By the same token, an AI could be at the same skill level, or quite a bit lower, and still be a handy tool. Particularly when you don’t have to pay it anything.

…and how good could they get?

Right now, the gap between an AI copywriter and a human is wide. But that doesn’t mean it can’t be bridged. As Arthur C. Clarke said, ‘Any sufficiently advanced technology is indistinguishable from magic’. But step by tiny step, that magic is made real. My 15-year-old self would gasp in astonishment at the smartphone I take pretty much for granted at 45. What seems like a fantasy today could be commonplace tomorrow.

We laugh at automated writing because we know that copywriting is really copythinking. We’re not mere word-arrangers; that’s just the part of the iceberg you can see. What clients really come for is the strategy-writing, the reader-empathising, the blue-sky thinking. The best creative work approaches the status of art. And a machine could never do that – right?

Well, again, maybe we shouldn’t be complacent, or presume that everyone shares our faith. The less of a premium clients place on originality, the less value a human being offers.

AIs are good at searching big data in response to queries expressed in human language. Given a database of ads or copy, suitably tagged, they could show you dozens of examples of responses to similar briefs, or executions of similar strategies, which you could then use as ‘inspiration’ to whatever degree.

‘Show me some soap ads that use empathy and social proof,’ you say, and Hal brings them forth. As you reject the ones that are wrong, Hal learns to find better examples in future. Soon, he’s going on Pinterest and finding obscure old ads from Brazil with killer ideas that you can steal in toto with complete impunity.

With landing pages and emails, it would be even easier, since the text is right there online, just waiting to be mined. AIs can already go out and find relevant news, repackaging it for human consumption. Parsing copy doesn’t seem like such a big leap. Hal could create a swipe file of a million pages in minutes. Can you do that, Ms Human Copywriter?

Then, after a while, Hal could take the next step, by learning to offer suggestions in response to a suitably codified brief. ‘Hey Hal, the product is affordable (good) but smaller than competitors (bad). What creative strategy could we use?’ You could turn weakness into strength. ‘How could inferior size be turned into strength?’ With a reworked version of a common phrase on that theme. ‘Can you suggest one?’ ‘Think small’.

In terms of longer copy, we have to accept that writing formulas exist, and that they work, up to a point. Right now, I’m reading Ray Edwards’ How to Write Copy That Sells. He proposes a sales-letter formula that could be handed straight over to a developer as a brief for building an AI writer. Again, over time, the machine would learn to do it better as it looked at more examples and received human feedback.

Finally, there’s technical correctness. It seems obvious that AIs could do a very good job of proofreading and, later on, possibly copy-editing too. Amusing phone snaps of grocers apostrophe’s will become a thing of the past. Grammar Nazis will have their final solution.

Could copywriters work with AI…

However, even if AIs do improve, human copywriters won’t disappear overnight. Someone will still have to program the machine, tweak its settings, give it feedback and select between the options it puts forward. And that could be a job for the forward-thinking copywriter, if only we can get with the programme.

Predictably, techno-evangelists exhort us to do just that. This piece by Jordan Fisher (about design) is typical. He argues:

So, these are exciting times and technology is there to be exploited. Don’t fear the machine, embrace it. It will give us freedom to tackle and to create more interesting work. Make sure you keep yourself on the cutting edge of software so you are always innovating to improve the efficiency of your workflow.

Work will become an effortless waft through all the nice stuff, as we enjoy more time to spend on ‘added-value tasks’. But even if machines can do 100% grunt, can we do 100% blue-sky thinking and produce stellar ideas all the time? Maybe we need a bit of gruntwork – as much for our own sanity as for the quality of the work. Detail work is the bun that goes with the burger – and it keeps you in touch with your craft.

…or will we just be replaced?

Then again, we might be lucky to do anything at all. In The Myth of the Endless Ladder, Nicholas Carr challenges the idea of people doing more ‘added-value work’ as a result of AI advances. He points out that this idea is derived from events that took place in the mid-20th century, and can’t be repeated infinitely with the same positive results. We can’t aspire upwards for ever.

As analyses of the employment impacts of industrial machinery show, the use of technology to automate a job tends at first to enhance the skills of a worker, making the job more challenging and interesting, but as the machine becomes more sophisticated, as more job skills are built into its workings, a deskilling trend takes hold. The highly skilled craftsman turns into a moderately skilled or unskilled machine operator.

In Harry Harrison’s sci-fi short story A Portrait of the Artist, a veteran comic-strip artist comes into work one morning to find he’s been replaced with a Mark IX Robot Comic Book Artist. It can draw entire strips unaided, in the style of all the ‘great masters of the Golden Age’. Having spent the last few years working with a Mark VIII, which draws under his instruction, the old man is now completely redundant.

But the field kept shrinking and when the machines came in it went bust and there was almost no spot for an artist, just a job here and there as a sort of layout boy and machine minder. He had taken that – how many years now? – because old and dated as his work was, he was still better than any machine that drew heads with a rubber stamp.

Not any more. He could not even pretend to himself any more that he was needed, or even useful.

The machine was better.

Let’s get real. Any ‘freeing up’ will not be in pursuit of some utopian vision of emancipated workers and endless leisure. It will be driven by capitalism, and the remorseless logic of the almighty dollar. We’ll start off using the tools, then end up being replaced by them. Hoping that AI will save us is like a turkey hoping for a Christmas present.

Will clients want AI writing, and will readers accept it?

As marketers, we sell stuff to consumers – but only indirectly. Our real business is selling marketing services to clients. And what happens next with AI will mainly depend on what our paymasters think of it.

We know from the SEO gold rush that when it comes to digital technology, a little learning is a dangerous thing. It’s easy to end up chasing fads that don’t necessarily add that much value long-term, simply because the market demands them. Enamoured by the idea of AI, clients could certainly start pushing us into using tools that don’t really work, or at least are not yet ready. Threatened by disintermediation, we may have to decide whether to comply or walk away. 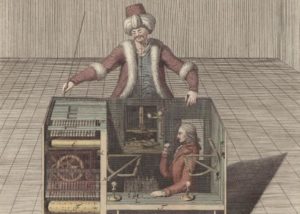 The Mechanical Turk, an elaborate hoax chess-playing machine from the 18th century

If we do find a role as custodians of the machine, that raises intriguing questions of transparency. If clients never actually interact with the technology directly, you could maintain that the machine had written or ratified your text even if it wasn’t strictly true – a sort of writing equivalent of the chess-playing Turk. An enterprising developer could do a nice line in AI software that ‘analyses’ and approves your text, complete with a convincing report stuffed with impressive stats.

Right now, firms using AI have the prestige of the trailblazer. They can get fawning publicity just for the fact they used AI to write copy, no matter how lame that copy actually is. But that could change. Once AI is established as a very cheap (if not free) shortcut to ‘creative’ content, it might come to seem shabby and undesirable. Even if consumers don’t know any better, marketing directors will. If they can persuade the bean-counters that human creativity is still worth having, they’ll surely go on buying it.

Or maybe content will separate out into human- and machine-generated, and everyone will understand that and be cool with it. Machine writing will be like the reanimated Peter Cushing in Rogue One, or music generated by programs like Koan. We’ll know very well that we’re reading a robot, but we won’t mind, as long as it works in that context. An AI-written news summary will be OK, but an AI-written novel probably won’t.

If that happens, we’ll just have to hope that copywriting stays on the right side of the divide, as an area where readers still demand the human touch. At the very least, surely some clients, and some briefs, will demand it. If not, check back here in a few years and you’ll be reading my robotic successor.