‘Rules are made to be broken.’ Whoever said that clearly wasn’t a cricket fan. Or, you might think, a copywriter. But there are some rules of grammar that, while widely accepted and obeyed, can and even should be flouted when the occasion demands.

‘To boldly go where no man has gone before.’ Strictly speaking, it should have been ‘to go boldly’, or ‘boldly to go’. But, as Gene Roddenberry well knew, either of those would have sounded ludicrous. If you want to really make an impact, there are times when it’s practically essential to boldly split infinitives no one has split before. 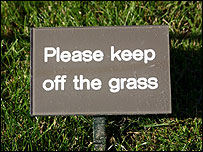 Without rules, our society would surely descend into chaos

‘Never use a preposition to end a sentence with.’ To comply with itself, this gem should read ‘with which to end a sentence’. But if you always did that, your copywriting would end up sounding like Brideshead Revisited.

Prepositions and conjunctions (beginning sentences with)

You shouldn’t really begin sentences with prepositions (‘with’, ‘of’, ‘for’ etc) or with conjunctions (‘but’, ‘and’, ‘or’, ‘so’, etc). But there are times when it’s essential. And desirable, to add punch and rhythm to your copywriting. So relax about this one too.

A sentence should always have a ‘doing’ word, or verb. But there are many sharp, conversational utterances that lack them, and if you want that tone in your copywriting, you’ll need to emulate them. Like this.

And here’s a few you can’t break: that and which, possessive apostrophes, decades (‘80s’, not ‘80’s’), its/it’s and their/there/they’re. If you don’t know what I’m on about, get yourself a copywriter!

Tags: grammar, that and which