The principle of consistency states that people align their actions with their clear commitments. Once they’ve made a public or explicit commitment, they tend to stick to it, since they want to appear consistent and honest.

Consistency is a very useful ploy in face-to-face negotiation. In my last post on persuasive copywriting, I mentioned an RSPCA canvasser who deftly used social proof to guide me towards a decision to donate. But at the start of the conversation, she’d also asked me whether I was an animal lover. I answered ‘yes’. (Would anyone say ‘no’?) The appeal for donations followed on from this, with the implication that refusing to give would be inconsistent with my stated position. Similarly, TV appeals count on people’s consciences making them follow through on their telephone ‘pledges’.

Copywriters, of course, aren’t in a dialogue with those they wish to persuade. But they can still ask questions that encourage the reader to commit to a position, albeit mentally, and use that commitment as the basis for a persuasive message. 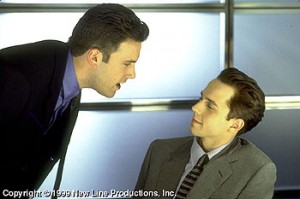 In the film Boiler Room, there’s a great scene where Ben Affleck’s character exhorts his trainee stockbrokers to sharpen up their phone selling. He implores them to ask any question, however rhetorical or ridiculous, just to get a ‘yes’ from the prospect. ‘If you were drowning and I threw you a lifejacket, would you grab it? Yes! Do you want 30–40% returns? What’s he going to say?’ (Click here to watch the clip, which contains strong language.) By saying yes to something – anything – the potential customer implicitly aligns himself with the seller.

This is why utterly clichéd headlines like ‘Do you want to save money on your home insurance?’ achieve useful aims: they elicit a positive response from the reader. They also provoke thought, generate active involvement and encourage personal identification with the product. From that platform, the copywriter can go on to build a case for the product or service they’re promoting, using the audience’s (tacit) commitment to their position as the foundation for their persuasive argument.

It’s also easy to see how consistency could be used to promote an upselling proposition, such as continuing with a magazine subscription. You subscribed, you enjoyed the magazine or found it useful, so why not continue? (Silent implication: because cancelling, having read and enjoyed the magazine, would be inconsistent.)