Persuasive copywriting is a matter of exploiting a number of proven, well-established principles. Those who persuade well know how to appeal to particular human desires and needs. By understanding these needs and appealing to them, we can become more persuasive copywriters.

The principle of authority states that people defer to experts, and are more likely to accept a suggestion if it is backed up by authority.

Once upon a time, adverts could get away with making big, bold claims about their products and have them accepted at face value. Slogans such as ‘Guinness is good for you’ and ‘Guinness for strength’ (illustrated) just came right out and stated a (perhaps contentious) benefit based on the advertiser’s own authority. In a slight variation on the theme, washing-powder adverts used an off-screen ‘voice of God’ to the on-screen housewife, putting her right about her choice of Daz vs Persil. 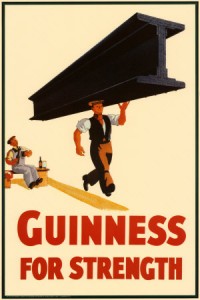 Guinness makes a bold claim in the days before the ASA

Over time, people grew more savvy and wouldn’t accept advertisers’ own words as gospel. So they had to bring in third-party ‘experts’ to back up their claims. This is still going strong today, with ads for toothpaste, shampoo and cosmetics presenting ostensibly impartial scientists, stylists and make-up artists to endorse the product. The underlying message is ‘do what the experts say’.

Sometimes, the authority isn’t a ‘real’ authority, just someone who’s likely to be regarded as authoritative – as in Carol Vorderman marketing Benecol in the late 1990s. She wasn’t a nutritionist, but in the public mind she was clever, wholesome and trustworthy.

So, invoking authority has a long and distinguished history. Does that mean it won’t work today? Absolutely not. As long as you use an authority that the audience actually respects, you can still persuade the audience very effectively. Some examples of authorities you could use (with potential products/services in brackets) include:

Basically, you’re looking for any material produced by an impartial authority that will back up your sales message. For example, it’s easy to see how eConsultancy’s trends and innovation reports could be used by online marketing firms to push their own service portfolios to potential clients.

Of course, if your audience is modern and tech-savvy, they may not take your word as gospel – or even the word of of a third party. Instead, they’ll go online to get the unfiltered, unvarnished truth, in the form of what other people are saying about you. For example, the typical Amazon user will probably glance at the official review and a third-party (e.g. newspaper) review, before focusing most of their attention on other users’ views. B2B service providers can collect and use customer testimonials in their marketing, as well as inviting reviews on various networking and directory sites.

Gradually, these shared user opinions have moved from the margins to centre stage. Their credibility has grown to the point where it’s eclipsing traditional authorities. Journalists have begun to establish the credibility of a ‘backlash’, ‘movement’ or ‘trend’ by pointing to the number of Tweets or Facebook groups about it, or including quotes from forums or blogs in their reports.

In an attempt to capitalise on the trend, cutting-edge initiatives like first direct live provide a snapshot of the social-media buzz (both positive and negative) about a brand. The idea is to appear open and honest, while also allowing the authority of real opinion to do the selling for you.

This approach can work, but it’s important to consider some key questions:

If you’re happy with the answers, it could be worth invoking ‘social authority’ by incorporating social-media content into your marketing efforts.