When we use metaphors (or similes), we compare one thing to another so we can understand or explain it better. We do this to explain it, to understand it or sometimes just to make our language more colourful.

Life’s but a shadow, a poor player
That struts and frets his hour upon the stage
And then is heard no more.

Here, the core of the metaphor is the equation ‘life=theatre’, with the secondary meaning ‘people=actors’. In these lines, Shakespeare is explicitly saying that our lives are as brief and futile as a play – a meaningless shadow rather than anything real. Implicitly, he’s also saying that we have little control over our destinies, like actors whose lines are written down for them. Once the parallel is drawn, a metaphor opens up a range of ways to think about something in a new way.

Neuro-linguistic programming (NLP) takes language seriously, acknowledging that it shapes the way we think. NLP practitioners pay close attention to the words people choose. By really listening to what people say, we can learn about the way they see themselves or the world.

To an NLP practitioner, metaphors are interesting because of their limits. They illuminate some truths while obscuring others; in NLP terminology, there are things they ‘allow’ and things they ‘disallow’.

For example, we might say that a trusted friend is ‘a rock’. Obviously, there are lots of unintended literal meanings: our friend probably isn’t thousands of years old, rough to the touch or permanently rooted to the spot. When we liken them to a rock, we’re saying that they’re solid and reliable.

However, they are human, so their moods and opinions change. Since rocks don’t change, our metaphor obscures this aspect of their personality, locking them into an idea of stolidity that may be limiting (for us, or for them). This highlights the importance of ‘stepping out’ of metaphors when they are no longer useful. 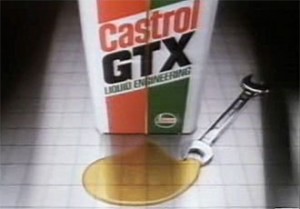 A good example of a strong metaphor in copywriting is the slogan used for Castrol GTX in the 1980s: ‘liquid engineering’. In just two words, it transformed an everyday, almost commodity product into something essential and sophisticated.

Copywriting metaphors like this derive their power from two sources: imagery and emotion. In general, people find it easy to grasp concrete images, and harder to understand abstract concepts. Moreover, they respond more strongly when their hearts are appealed to, rather than just their minds. ‘Liquid engineering’ equates Castrol’s oil (an inanimate object) with attentive, skilful human engineers, suggesting that it provides a similar level of care, while appealing to the customer’s desire to care for their engine and safeguard their investment.

Castrol’s metaphor was apposite, elegant and memorable – a brilliant piece of copywriting. But it’s very easy to get drawn into using a metaphor for its own sake, or pressing one into service that isn’t quite suited to the job at hand. The following is the text of a magazine advert currently being used by a leading UK insurer:

Would you buy an umbrella, if it didn’t keep you dry?
Neither would we. So why should you pay for an insurance policy that won’t keep you properly covered? Unlike 8 out of 10 standard home insurance policies we include cover for your belongings if they are accidentally damaged or lost – as standard.

The text is accompanied by a picture of an umbrella, highlighting one of the key benefits of metaphors in marketing – they give you a handy hook to hang your imagery on when none is otherwise available. (Services are often hard to depict – it’s even worse in B2B marketing.)

Although ‘insurance=umbrella’ seems promising as a metaphor (if unoriginal), here it actually muddies the meaning rather than clarifying it. Have you ever had, or bought, an umbrella that didn’t keep you dry? How would you know that an umbrella wouldn’t keep you dry, before you bought it?

The umbrella is an everyday item, but the situation described is artificial and not one that readers will immediately recognise from their lives. As a result, the metaphor won’t have the sensual, concrete force that drives emotional impact.

Instead of providing a useful stepping-stone between something familiar and a new concept, the headline metaphor in this example is adding a cognitive barrier between reader and benefit – and therefore putting obstacles in the way of a sale. The headline is literally a riddle, and if you ask your reader to solve riddles you run the risk of them simply walking away.

Since the core benefit is easy enough to understand for anyone who’s ever bought home insurance (which is almost everybody), a better headline might be:

With [Insurer], cover for damage and loss come as standard.

Or, for a bit more spice:

What’s extra for others is standard for us: damage and loss cover included with every home insurance policy.

Of course, you wouldn’t be able to include a nice picture of an umbrella, but you would have a headline that would actually generate interest.

It’s well known that headlines with benefits outpull those without. So if you’ve got a benefit that’s easy to communicate, it should always lead your copy. If you want to connect with readers, resist the tendency for what my granny used to call ‘clevering off’.

Here are a few pointers for making metaphors work in copywriting.