UEA Sportspark is a major sports and leisure centre in Norwich. During 2010, it was rebranded by The Click, an up-and-coming local agency who have quickly built a reputation for highly creative corporate branding and identity. Their work often takes lexical or typographical elements from the client’s name as a starting point: letters form shapes, words form shapes, words form letters.

For Sportspark, The Click took the two initial letters ‘SP’ as the starting point both for the client’s new logo and a range of adverts and posters using single words beginning with ‘sp’ (e.g. ‘sparkling’ for swimming, ‘spontaneous’ for ‘pay and play’ facilities and so on). You can the concepts deployed to great effect on Sportspark’s home page. 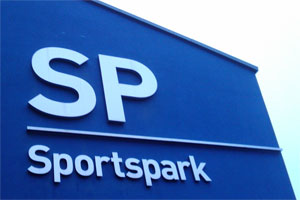 Exterior signage at Sportspark, based on branding by The Click

Although The Click weren’t engaged to consider Sportspark’s tone of voice (as far as I know), their work still projects a very distinct feel. Using the three-value framework I proposed in my post on defining a brand’s tone of voice, we might sum up Sportspark’s projected character as ‘easy’, ‘healthy’ and ‘fun’.

The new brand and tone are reinforced as you enter the building, with a shiny silver sign outside the entrance (right). Inside, promotional posters (presumably produced by The Click) use the same design style as the outdoor and press advertising. However, things change once you get nearer to the ‘business end’ of the facility.

Consider this noticeboard on the way into the swimming pool – a high-traffic area that has clearly been identified as the best place to communicate in writing with users of the pool.

The contrast with the corporate brand could hardly be greater. Visually, everything is different: print format, image style, typography, colour choice. The Click’s branding is still faintly present in the form of the ‘SP’ logo (highlighted with two light circles in the image), but the general impression is that of a completely different ‘character’. (I’m not saying that one is better or more effective than the other; just that they’re different.)

Tonally, we’re in a very different place too. Consider this notice:

All enquiries are to be made in person at Reception asking for Jane or Christine
Monday – Friday between the hours of 8.30 a.m. and 5.00 p.m.

FOR HYGIENE REASONS SOME ITEMS WILL BE DISPOSED OF IMMEDIATELY 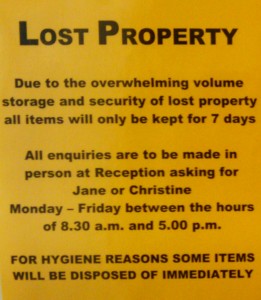 Whereas the marketing collateral is simple, elegant and breezy, the personality projected here is officious, brusque and rather peevish. Rather than aiming to help or serve customers, its main preoccupation is the problems that its authors have to deal with (‘overwhelming volume’). It also uses the passive voice (‘All enquiries are to be made…’), which puts distance between writer, reader and message.

To bring it into line with The Click’s visual style, it might be rewritten as:

To reclaim lost property, just ask at the front desk for Jane or Christine between 8.30am and 5pm, Monday to Friday.

Please note that we get a lot of lost property, so we can only keep things for a week. Some items have to be thrown away immediately, for hygiene reasons.

In technical terms, inconsistent tone is an eminently solvable problem. Word can use any font and, within its limitations, can do a reasonable imitation of most clean and simple layouts created with QuarkXPress or InDesign. With a good template set up, it should be quicker and easier to produce a nice corporate-looking notice than create a self-designed one from scratch.

In terms of language, it shouldn’t take that much longer to think of a friendly word instead of an ‘official’ one. It’s an effort, admittedly, but one that gets easier with time and practice.

In most cases, however, inconsistent tone isn’t the result of a lack of technical know-how. The real problem is cultural. (And I should emphasise that I’m talking about organisations in general here, not Sportspark in particular, of which I have no inside knowledge.)

Why does it happen?

Inconsistent tone arises when different messages are created independently by different people within an organisation, with no shared policy on tone of voice. Usually this happens because no one is responsible for tone of voice throughout the organisation, and/or because some people don’t see it as an issue.

Two departments that are very likely to be on different pages when it comes to tone are marketing and admin. These two groups are often distant in terms of organisational hierarchy, professional worldview and working culture. Marketing are responsible for getting new customers through advertising and brand-building; admin are responsible for ‘oiling the wheels’ by creating and applying internal processes.

Under pressure, both departments are likely to  lapse into defensive bunker mentalities: a resentful mindset of ‘nobody understands us’. (In smaller organisations, marketing and admin may be handled by the same people, or even the same person, which can actually be a plus.)

Most of the time, this separation isn’t a problem. The marketers get on with winning creative awards, and the administrators make the trains run on time. But if admin people are customer-facing, then tone of voice becomes a shared issue.

Marketing and admin both deal with customers, but at different stages in their experience. Marketing bring in new customers, encouraging them to begin the buying cycle; admin deal with ‘processing’ people who’ve already made a decision to buy.

Taking a different tone at post-purchase stages of the customer experience, albeit unintentionally or unconsciously, sends a message – and not just the message carried in the words. For example, if the tone of ‘existing customer’ communications is unwelcoming, customers may infer that the organisation only cares about them until they buy, or that the tone adopted in marketing communications is a put-on. Writing in ‘officialese’ is a defensive reflex that puts up barriers between author and reader – and readers will sense that, even if only unconsciously.

If customer experiences were isolated, linear narratives, inconsistent tone would be less of an issue. As long as people buy, who cares what they feel after the sale?

Unfortunately, many experiences end with a decision on whether or not to repurchase (should I replace this product, or renew this service?). And bought experiences aren’t isolated; they mingle with others’ via the sharing of opinions and recommendations – a process that’s now turbocharged by social media. In some sectors, the way customers feel after they buy could have far more impact than above-the-line marketing.

Ultimately, brands are what people think about them. If we’re serious about building a brand, we have to take every interaction into account – not just the ones that are easy or fun to manage.

It’s a real problem, but it’s so subtle and intractable that most organisations either don’t know about it or choose to ignore it. As with other issues that affect two or more departments at once, there’s very little appetite for broaching the subject. More often than not, marketing and admin resort to drawing a chalk circle around their responsibilities, focusing on core tasks just so they can get things done.

Administrators deal with the nitty-gritty of sorting things out at the sharp end, fiercely defending their right to use the tactics that they feel are most effective – such as making notices with clipart, or creating their own email signature. And because they are so focused on short-term efficiency and local problem-solving, they tend not to look at ‘big picture’ outcomes like customer experience. (To be fair, they’re rarely invited or expected to.)

Marketers, meanwhile, collaborate with outside agencies in tightly bounded, outward-facing branding projects that don’t involve their colleagues in other departments – reducing scope to increase control. Often, their ultimate nightmare will be the obligation to gather and act on feedback on their carefully considered campaign from people in other departments who couldn’t care less about marketing (perhaps even despise it). Very rarely will they take on the Herculean task of getting their colleagues to act and speak on brand. They may talk about brand and tone, but when it comes down to it, their focus is very much on the low-hanging fruit of sexy ad campaigns rather than grasping the nettle of tone across the organisation.

Could copywriters and agencies do more about this? Should we be raising these issues with our clients? We probably should, but on the whole we tend to decide that we simply won’t go there, for the sake of a quiet life. We’re just as guilty as our clients of drawing chalk circles around the tasks we’d like to do.

As copywriter Tim Rich notes in this post, those who offer ‘tone of voice’ services are rarely offering to help with the spadework of imposing a consistent tone. And who can blame them? Even the finest tone guidelines, backed up by the most incisive training, probably won’t sort out the tangle of internal politics. Why take on a problem that you won’t be allowed to solve?

We have to be realistic about costs, too. I’m not sure how many companies would pay a copywriter to write their lost-property notice, or even help its admin people learn how to write in a particular tone. (Although, as I hope I’ve shown, a case can certainly be made for it.) With limited resource, it’s only natural to focus on the communications that make the biggest splash – even if they’re not necessarily the most important ones for customers.

And that’s why tone of voice is so often the icing on the cake, rather than the words that go right through the rock.