In recent months, like everyone else, I’ve been trying to make myself like dubstep. I’m not sure who I was trying to kid. To me, James Blake sounds like a robot weeping in frustration while trying to mend a clockwork toy, sitting in an abandoned train station.

So my dubstep playlist is gathering digital dust. But the idea of dubstep stayed with me. It’s the music of darkness, uncertainty and plurality – the sound of (sub)urban anxiety played out in inner, subjective space, evoking memories and blurred perceptions. Overwhelmingly internal, it draws the listener away from the real world and into themselves. As Blake puts it, ‘when I first heard a dubstep track, it took me so far into my own head that I couldn’t work out how it was happening.’

And I got to thinking. Why doesn’t copywriting ever do that?

The visual styles used in marketing can be abstract, surreal or magical. But the words that accompany them usually make everything clear. They explain and clarify rather than evoke and question. They’re punchlines, not poems. Why don’t commercial writers deploy ambiguity, obscurity or haziness in their language?

Consider this text, which is from the early stages of a Paul McKenna audio hypnosis (no copyright infringement intended):

…easing every one of the muscles in your body, bit by bit; and comfortably, aware of your shoulders; comfortably, aware of your hands; and I don’t know if you’ve noticed, one hand is probably slightly heavier than the other; and one hand is slightly lighter; and I don’t know if you know which is the right hand, and which hand is the lighter; which hand is the one, and which one is left.

As you think and relax more deeply; as the pleasant sensations of drifting away, into a quiet calm place, are beginning, and, doubling that sensation is very pleasant; as you relax, just as you are, for a little while longer, you might just find yourself, in a comfortable state of being, calm and happy, deep inside, because you can find your own inner stillness; as you do so, that inner stillness expands and relaxes you into a state of, deep silent joy…

(It’s hard to know quite how to punctuate this. I’ve used commas and semicolons to denote pauses, which have an important impact on the meaning. It seems like the text should not have full stops – rather like Satie omitting a time-signature and bar lines from his Gnossiennes.) 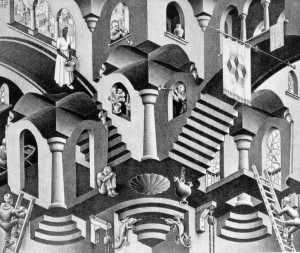 This passage is written using what in NLP is called the Milton Model, or ‘artfully vague’ language. Without getting too technical, it uses techniques such as syntactic ambiguity (‘which hand is the one, and which one is left’) and embedded commands (‘relax more deeply’) to distract the conscious mind and speak directly to the subconscious. However, the thinking behind it is anything but vague – the Milton Model is a sophisticated, subtle tool that requires masterful word skills in order to get results. Just observe what happens in your head when you reach the bit about the lighter hand – it’s like the verbal equivalent of an Escher picture, where you suddenly don’t know which way is up.

Could it work in writing? Not quite as well as in audio, since reading always involves conscious effort. Also, once the words are written down, the reader is free to backtrack and reread, rather than being carried along by the narrator. But written text can certainly create indeterminate or ambiguous meaning – just ask any poet. And, as I’ve argued, readers of online media are, to an extent, motivated to explore. It’s the nature of the medium.

Hang on, says the marketer. Why would I want to blur my message? Well, for the same reason the poet does – to make it more memorable and arresting. To make it sing instead of talk. To add emotional equity to your brand, instead of trying to instruct or influence the reader. And, like the NLP practitioner, you would presumably also be interested in any method of influencing the reader to act in a particular way.

How might artfully vague language be deployed by the copywriter? I think it could work whenever the reader needs to ‘get inside the head’ of a third party. For example, I can imagine a charity site presenting a stream-of-consciousness narrative from a fictitious victim of the hardship they work to alleviate. Hypnotic copywriting might also be used to draw the reader into their own internal world. This could be used to sell anything with benefits linked directly to the ego or self-image – clothes, beauty treatments, cars.

Would it work? A lot would depend on execution – but that’s the same with any concept. A lot of writing that we think of as ‘working’ is really just orthodox – it isn’t actually getting through to readers on any level at all. If nothing else, vague language would offer a truly unprecedented means of differentiation. And if it didn’t convert? Well, you could always call Paul…