This type of shit won’t hit the top ten
But we won’t bend – we won’t switch off, pretend
Rebel MC, lyrics to ‘The Governments Fail’, 1992

I love this couplet, which guarantees the outcome it describes. Acknowledging that his revolutionary stance and street-tuff sounds will never find a broad audience, the Rebel defiantly turns his music’s marginality into a virtue. ‘Those who have ears to hear, let them hear,’ is the implicit message. 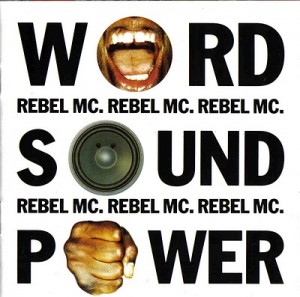 It's like Public Enemy, but with dreads. And not quite as good

By quoting these words, I’ve taken a similar approach. My peoples will see them as confirmation of my edgy, urban flow. Playa hatas, on the other hand, will probably regard the mild profanity as uncalled-for, gauche and a little embarrassing. Either way, the tactic will probably get a reaction. It is, quite literally, divisive – drawing a line between those who are drawn to my tone and message and those who aren’t.

This kind of tone is all about knowing who cares about your message, and who doesn’t, and targeting your tone of voice accordingly.

The corollary is that you have to be able to define these two groups with reasonable accuracy. For some products, that’s easy. For example, consider the slogan used by children’s medicine Calpol:

If you’ve got kids, you’ll understand

Cosily alluding to a tacitly shared experience for parents, it’s unbearably smug and mimsy for everyone else. But that doesn’t matter, because the product has zero appeal to anyone but fretful mums and dads.

Similarly, check out this slogan from Konectbus, one of our local bus operators:

Sunday is a day of rest shopping

I think this must be borderline offensive to committed Christians, since it essentially rubbishes one of the Ten Commandments. (Imagine a similar tactic with Allahu Akbar: ‘God is great – and so are our travelcards!’) But since the faithful won’t be heading for Chapelfield for a pair of Levi’s and a flat white on a Sunday, Konect has obviously decided they’re not worth fretting over. (However, these Venn circles aren’t completely separate – Christians might be keen shoppers on other days.)

The slag of all snacks

The TV spots using this phrase were banned in 2002 when 310 complaints were received by the ITC. Even though the number represented a tiny minority of viewers, the ad still got pulled, and had to be reworked with the far weaker phrase ‘sounds dirty, and it is’. This inspired slogan, which surely got a big smile and strong recollection from anyone likely to buy the product, was too divisive for its own good.

All these slogans focus on converting their most likely prospects, which is always a good idea. There’s really no point targeting people who will never be interested, regardless of what you tell them. So don’t kid yourself (or let your client kid themselves) that you can magically expand the product’s appeal with your words.

In other product categories, where absolutely anyone could be a target, the message has to have a more universal appeal – which is how we end up with slogans like ‘I’m lovin’ it’, where the meaning has been spread so thin that it has absolutely no depth.

However, catering to an audience segment that isn’t actually that important to your brand can quickly drawn you into deep water. In the online arena, the most embarrassing manifestation of this was Gap’s self-abasement in response to the reception for its new logo, which I documented in this post. Hypnotised by social-media flaming like a rabbit in the headlights, Gap completely forgot who its customers were, and where it actually sold its products, leading the firm to bottle its carefully considered strategy to refresh a tired high-street brand.

Social media is another area where a highly idiosyncratic tone of voice can reap dividends. On Twitter, for example, you’ll find a host of marketers putting out a bland, me-too stream of news items and retweets from their peers, casting the net wide in the hope of attracting a broad audience.

But the ‘please like me’ tactic is self-defeating, because it offers no differentiation. Often, it’s those Twitter personalities who offer trenchant opinion, industrial-strength language and combative interaction who attract big, loyal followings.

On blogs, too, you’ll often find writers stirring up strong opinion in order to position themselves as leaders rather than followers – often becoming ludicrously grumpy or confrontational in the process. Sometimes, this is the expression of a genuinely held opinion, aimed at a sympathetic audience who will understand. At other times it’s pure trolling, throwing the content cat into the commenting pigeons with the aim of maximum impact (and SEO benefit).

Opinionated writers can also boost exposure by appearing as ‘fish out of water’ guests, offering a sharp contrast with the prevailing tone of the host site or publication. For example, have a look at Christopher Montgomery’s pieces for the Guardian. For readers weaned on well-meaning but interminable liberal hand-wringing, his mix of perfidious Cameron-bashing and unrepentant Thatcherism feels excitingly spicy and forbidden – repulsive and compulsive all at the same time. Putting his opinions on the Guardian is like putting Mentos into Diet Coke – a sure-fire recipe for frothing indignation.

Unless you’re actively seeking a contrary reaction, choosing the right tone of voice is all about generating maximum value – as opposed to maximum appeal. You’re looking to cultivate interest and loyalty from a specific group, which usually means being yourself without going out of your way to offend. At the same time, though, it’s always worth bearing in mind that your target audience may prefer to hear things in a way that others really don’t like. Get the balance right and you can make lots of friends by making a few enemies.