Recently, Brent Council launched an online survey seeking opinions on its ‘waste messages’ – slogans and designs intended to raise awareness of the importance of recycling.

‘Waste messages’ pretty much sums up the exercise. And leading copywriter Nick Asbury has already done a very good job of skewering the inanity of the survey, so I won’t recycle his ideas. But, as Nick notes, even if the survey was far more cogent and concise than it is, the principle behind it (crowdsourcing) would still deserve to be binned. I’d like to explore some of the reasons why.

Surveys are not reality

Consultations like Brent’s ask people to evaluate alternatives in a measured, rational way, in one concentrated session, and give explicit feedback. They invite them to become discerning, disinterested experts rather than impulsive, self-centred consumers. Respondents are required to verbalise and organise their thoughts into a form they’re prepared to share.

Unfortunately, that’s the exact opposite of the way people actually consume marketing messages. In daily life, we often apprehend creative content chaotically, hurriedly, semi-consciously and perhaps also reluctantly, over multiple occasions – watching TV while eating dinner, listening to radio in the car. If we do form an internal impression of the message, it’s likely to be vague, non-verbal and largely unconscious. Our reactions don’t have to be rational or consistent, because they stay inside our heads. And if the message isn’t directly relevant to our lives, we’ll probably just ignore it.

Moreover, crucially, we’re faced not with many versions of a single message against a clean white background, but with thousands of radically different messages, all screaming madly for our attention from a range of media.

So asking for views on potential creative may throw up some interesting opinions, but it can never reflect the response it would get in real life. A rat that can run a laboratory maze may not be ready for life in the sewer. If you want to know whether your ad is a winner, you need to put it in the race. For real.

People don’t know what they want

When you ask people what they want, they’ll give you an answer, even if they have to make something up. If I ask you whether you prefer cats or custard, you’ll think of an answer, even though you’ve never considered the question before. You can’t help it.

However, people’s response to abstract questions or ideas may not tally with their reaction to a fully executed cultural artefact. As Henry Ford said, ‘If I’d asked people what they wanted, they would have said faster horses.’ People may neglect or reject they very thing they’d like best, if it’s outside their conception or just presented to them in the wrong way. Steve Jobs echoed Ford when he said, ‘It’s really hard to design products by focus groups. A lot of times, people don’t know what they want until you show it to them.’

To prove this point, Russian researchers Vitaly Komar and Alexander Melamid asked the public in several countries what made a perfect picture – and what didn’t. They then commissioned artists to paint the ‘most wanted’ and ‘least wanted’ pictures based on people’s answers. You can read about the project here and see all the paintings here. 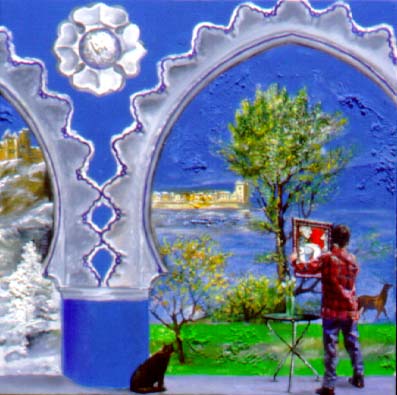 I’ve included Germany’s most wanted picture on the right. Like the others, it’s a ludicrous, incoherent mashup of visual clichés that few people would really enjoy. (By contrast, many of the ‘least wanted’ paintings are convincing abstracts that I’d be happy to hang in my lounge.)

Komar and Melamid’s project was a joke with a serious point: you can’t make art out of opinions. People’s responses to a cultural artefact are legitimate, but that doesn’t mean you can use them to guide the creative process; to do so is to put the cart before the horse. The crowd may know what it likes in great detail, and with great certainty, but it still can’t create it.

The answer may lie outside the scope 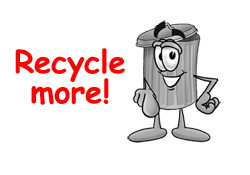 What if big red letters in Comic Sans, alongside a cartoon dustbin, would actually be far more effective than any of Brent’s options? The survey as it stands will never find that out, because it very clearly rules particular options in and out.

Obviously, my treatment probably isn’t the right one. But the perfect idea is out there. A properly briefed and empowered creative could go out and find it – or at least get a bit nearer to it. More and/or better creative thinking would have been a far better investment than the survey.

While Brent claim to be seeking opinion, they’re actually imposing far more ideas than they’re inviting. Like everyone who conducts ‘listening exercises’, they’re torn between intellectual insecurity and a need for control.

You only hear what you want to hear

Any agencies or creatives who have presented ‘options’ to a client will know all about the way the consultation process is closed down and stage-managed. While the options are ostensibly equal, there is always one that the creative prefers. Often, one or two will be complete no-hopers, in there to make up the numbers. Sometimes, there’ll be a totally off-the-wall option, inexorably destined to be earnestly discussed but ultimately rejected.

The whole exercise is designed to give the client an impression of due process, and stress their own personal importance and involvement, while gently shepherding them towards a predetermined outcome. (Sometimes I wonder if the clients actually know this, deep down, but play along anyway for the flattery.)

The point is that it’s impossible to avoid bringing your own agenda to the consultation, even if unconsciously. The options on the table, the phrasing of the questions, the format of the survey – it may look balanced and scientific on the surface, but it can’t help but reflect your own idea of what’s right.

You end up imposing your own ideas

Thanks to social media and the web, the ritual of presenting options to the client has mutated into a monstrous and dangerous new form: completely crowdsourced creative.

Instead of badgering their creative agency into producing one good design and four pointless alternatives, the client can just go straight to 99 designs and get 500 rubbish designs to choose from – at a fraction of the cost.

Since the designers involved are paid little or nothing, their submissions are severely compromised in terms of commitment, time and ideas. So instead of buying one great idea, the client gets lots of weak ones through which they can enact their own taste and control-freakery. Crowdsourcing design means buying lots of rubbish little dogs and barking rubbishly yourself as well.

The mindset behind all this is puzzling. I guess we could sum it up something like this: ‘I know I can’t do this myself, so I need someone more creative to do it. And although I trust them to produce the ideas, I don’t trust them to choose the best one – I’ve got to do that. And even though I wouldn’t have any idea how to proceed when faced with a blank page, I’ll know the right answer when I see it.’

You can’t judge quality as well as you think

‘I’ll know it when I see it.’ Will you though, really?

Buy the Arden edition of Macbeth and read the footnotes. You’ll see scholars who spent their lives reading Shakespeare arguing over what he meant to write, in cases where the original text is unclear. Although we know that a line of Shakespeare is genius the second we read it, we probably couldn’t pick it out in a beauty parade of similar lines.

The classic case in point is the saga of the Gap logo. Having (wrongly) caved in to social-media pressure over its new logo, Gap opted for crowdsourcing – before descending into uncertainty, bottling the whole thing and keeping their original. It was excruciating to see a company that had been brought to its knees by feedback going back for more, looking for yet more content when what they needed was clarity.

The lesson is clear: choice brings uncertainty. You need to reduce options, not proliferate them – throw away the bad ideas and get to the good. Anyone can casually throw out another possibility, particularly when they’ve got nothing to lose. Genuine creatives pick one winner and back it all the way. For better or worse, they commit themselves in a way that survey respondents or crowdsource participants just don’t. And only commitment gets results.

The best way to get great ideas

Rejecting second-rate alternatives is a job for creatives. They do it so the client doesn’t have to. They do it as part of their method, before they show anything. They do it internally, before they write a word or draw a line. They probably do it unconsciously, before they even start thinking about the job. And they do it because they’re the experts – or, at the very least, more expert than the client is.

All creative work is based on the idea that there is a single best solution to a communication problem. For that product and that client, in that medium, in that culture, at that point in history, there is an answer that is perfect. That’s what we aim for when we brainstorm, when we produce and filter alternatives, when we revise and revisit our work, when we reject ideas and start again.

Looking at the great work, such as the famous Economist posters, we feel that it’s close to perfection. The concept is so elegant, so well executed, that we feel we’re looking directly at an idea, rather than the expression of an idea. The creative, the execution and the client have all come together in perfect harmony. And that’s where we’d all like to be.

Of course, we might not get there. There might not be enough time, or enough money. We might not be focused enough, committed enough or indeed creative enough. The client might not agree with us. But whatever the constraints on our work, we’ll arrive at a solution that’s the best we can do in the circumstances. It should be presented without alternatives and published without consultation. To do otherwise is weak, misguided and simply not effective.

Believe in creatives and trust them to create.