Copywriters are an arrogant bunch. Read any copywriting blog (including this one) and you’ll find reams of advice on how to ‘persuade’ or ‘influence’ the reader. To look at our stuff, you’d think all we had to do was put pen to paper to get the reader reaching for their credit card.

Deep down, a lot of marketing thinking is like this – mechanistic, mathematical, systems-based. I do this, so you’ll do that. Action and reaction.

Even social-media marketing, which supposedly caters to people’s own personalities and preferences, is ultimately transactional and reductive in terms of the value advertisers offer and the behaviours they hope for in return.

However, such models are hard to reconcile with our own experience. In real life, communication doesn’t always work the way we hope. If I assert that I’m modest, or funny, you actually infer the opposite. If I bluntly tell you to do something, you’re more than likely to refuse – even if it would benefit you to obey. (This phenomenon, known as ‘reactance’, will be familiar to parents of young children.)

Although marketers all know this, it’s easy to slip into a kind of doublethink once we get to the office. So we put together ‘push’ messages aimed at people ‘out there’ while maintaining that we ourselves are far too sophisticated to be influenced by the tactics we use. Using words like ‘consumer’ and ‘prospect’ helps to blot out the inconvenient truth that our readers are real people with minds rather than Pavlov dogs.

What I put into my marketing may not be the same as what you take out of it. I may have a ‘meaning’ in mind, but you may infer something completely different. In literary criticism, this principle is known as the intentional fallacy. Whatever the author ‘meant to say’ is both unknowable and irrelevant; readers create meaning for themselves.

A complete model of communication includes the response of the audience as well as the intentions of the speaker or writer. If I want to communicate, you have to hear my words and reach the conclusion I want. If you don’t, my communication has not been effective. NLP practitioners express this as ‘the meaning of a communication is the response that you get’.

So, if I want you to think I’m funny, I need to tell a joke. If I want you to believe that I’m modest, I need to refrain from trumpeting my virtues – perhaps for quite a long time. And if I actually want you to do something, I need to demonstrate or illustrate some reasons why you should do it – ideally, appealing to your self-interest in the process.

In other words, I need to show rather than tell.

Very often, we see the discipline of copywriting (perhaps the whole of marketing) as a quest for clarity. We want to say things explicitly and unambiguously, making sure people get the message. This urge to control the reader’s thoughts naturally leads to direct, concrete modes of expression.

However, a lot can be left out of a message before its power is diminished. If start missing out some, you can still out what mean. A lot of dubstep draws its power from the implied double-time rhythm that listeners hear inside their heads.

Often, the best way to connect is not by stating things directly and exhaustively, but by involving the audience in generating the meaning. As Arthur Koestler said, ‘The artist rules his subjects by turning them into accomplices’. This is one area where there’s a very clear parallel between copywriters and poets.

It’s all about leaving gaps between the dots, or stepping stones instead of a bridge. And it leads to work that makes people ‘lean in’, in Luke Sullivan’s words – inviting them to do a little of the work in return for a bigger payoff.

‘Showing’ rather than ‘telling’ means taking the reader part of the way towards your intended conclusion, but allowing them to complete the journey by themselves. For example, they might be required to work something out or recognise something they already know (from culture, their everyday lives etc). Ideally, their contribution will play a part in illustrating a key benefit, or emphasising a call to action, or both.

My own home page is a modest attempt to do this, inviting the visitor to consider why the examples of ‘copywriting’ work better than the examples of ‘writing’, without explicitly talking about benefits, calls to action, customer focus and so on.

A better example is the advertising for Silk Cut cigarettes. After 1986, UK advertisers were no longer allowed to show people smoking. Gallaher Group, the makers of Silk Cut, responded with a set of deliberately arch, cryptic ads, created by Charles Saatchi, that ended up alluding to the brand and the product without words, pack shots or even any branding in the conventional sense. 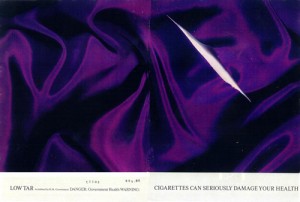 Have a look at the image. The train of thought evoked by this ad goes something like this:

Only some (if any) of the steps are conscious, but that’s part of the magic. (If you want to explore the latent themes of luxury, femininity, weakness and mutilation in the Silk Cut ads, check out this thesis.)

Like a poem, this creative works on many levels – the most powerful of which is the mental tick from the reader’s inner teacher for working out the puzzle.  In effect, the reader creates their own message ­– and it’s far more powerful for being spontaneous, internal, unique and possibly non-verbal.

Barred from describing or showing the actual ‘benefits’ of its product, Gallaher offered other types of benefit that were still very real and powerful: enjoyment, amusement, intrigue and feeling clever. And the campaign was far more effective for showing instead of telling.