The Guardian has recently started a running blog. Adharanand Finn’s inaugural post on Why we love to run does a good job of living up to its title, but also feels a bit like trying to explain colour to someone who can’t see. Running’s a bit like that – until you start, it’s hard to understand the appeal.

Adharanand’s piece vividly describes some of the emotional and physical benefits of running: setting and achieving goals and reconnecting to a sort of primal joy. But there are intellectual benefits too, such as helping you generate ideas and express them in words. And that’s what this post is about.

We sometimes talk about writing as though the words sprang straight from our heads. But there’s always a physical process mediating between brain and page, whether the tool of choice is a computer, a pencil or a voice recorder.

All things are created twice: once in the inner world of thoughts, and again in the outer world of reality. With writing, it’s easy to lump these phases together without really thinking about it, by mentally choosing the words and physically capturing them at the same time. And although recording thoughts is often the only way to keep hold of them, it can be productive to take a different approach from time to time. 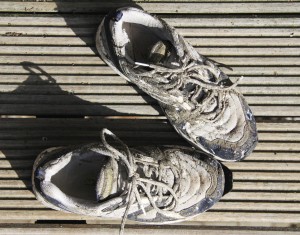 Photo by gesinek at RGBStock

Many copywriters, including me, have used a pitch along the lines of ‘come for the writing, stay for the thinking’, emphasising that copywriting is more than the physical act of writing. But it’s relatively rare for me to actually sit down and do nothing but think about a brief for any length of time, with no attempt to record my thoughts. I might break off from writing to stare out of the window for a minute, but as soon as I have an idea, I turn back to the keyboard.

Instead of having dedicated thinking time, I let the cogitation fill up the cracks in my day, partly by musing on my current jobs while I’m doing other things, and partly by delegating them to my unconscious mind. A good night’s sleep can often be remarkably effective in shaking down your ideas – I’m writing this at 6:48am, having been woken early by my daughter, and the words are flowing beautifully. Often, ideas bubble up while I’m doing something else, like making dinner or taking a shower. Conscious disengagement clears the decks for unconscious engagement.

Running is an excellent way to make this happen in a more deliberate way. It’s physically demanding but not mentally challenging, so you can switch off your thoughts to some extent. And it also delivers a powerful synaesthetic switcheroo that really shakes up the mental processes.

Instead of staring at a screen, you’re gazing at a line of trees on the horizon. Instead of sitting slumped and stultified in a stuffy office, you’ve got a feeling you’re in motion; a sudden sense of liberty. And instead of a tinny voice in your ear asking if you can get it done by Thursday, you’ve got the sound of the wind and the birds – or, if you prefer, a hypnotically repetitive house choon like the one below. (I find music not only enhances my thinking, but also makes the ideal distraction from chronic knee pain.)

Cognitively, the effect is to uncouple the links between conscious and unconscious. Your mind turns things over, but in an indirect way: elliptically or hermeneutically rather than fretfully or obsessively. Thoughts orbit each other like moons, slipping away and returning like waves, gently displacing each other like pebbles. Ideas arise, and you can choose to hold them and shape them, or just let them go by. (There’s no doubt that running can be a form of meditation.)

Old memories may resurface, while new ones are put on the back burner – sometimes, I find I don’t remember the run itself later in the day, because my state of mind while running is closer to sleep than full wakefulness.

A good run gives you a decent amount of time in this state: up to an hour, if you’ve built up to middle-distance runs, or even longer if you’re training for a marathon. In my experience, you do need at least half an hour to start feeling the full benefit.

Writing on the run

In terms of words and writing, I usually find that running throws up fragments and concepts rather than fully formed passages of text. If I’m feeling motivated – or if the ideas excite me enough – I can ‘step in’ to my mental processes and try to stitch them together into a narrative. Incidentally, this is rather like John Lennon’s approach to songwriting, which he conceived as ‘doing little bits which you then join up’.

Obviously, I can’t write anything down, so I have to hold the entire text in my memory as best I can. This, in itself, is a good discipline, because it prevents me running off to the next point before I’ve finished the one I’m on. I go over it again and again in my mind, and type everything up when I get home. Well, I say ‘everything’; I’m sure a lot gets lost, but a surprising amount is retained. Also, because I’ve been mentally refining it during the run, most of it is usually pretty good. Which makes a change from typing out a mediocre opening paragraph, staring at it for five minutes, deleting it and going to make a coffee.

The approach is rather like the way Douglas Adams reportedly worked on the radio scripts for The Hitch-Hiker’s Guide to the Galaxy. An incorrigible procrastinator, when he made a mistake he would sometimes remove the entire sheet from his typewriter and start over. It’s easy to imagine him taking the opportunity to hone his brilliant dialogue in the process, combining a slow working pace and endless reiteration to devastating effect.

In a way, this approach is the opposite of ‘braindumping’, where you just throw everything on to the page in an effort to move your mental process forward. Both techniques can be useful. In fact, they complement each other: when you get back from your run, you’ll usually want to head straight for the keyboard and get it all down before it evaporates like a dream.

Some of my best ideas have come to me while running. Sometimes, they’re nuggets like slogans or funny tweets, which are relatively easy to commit to memory. But I’ve also had ideas for blog posts (including this one) and started mentally working them up.

Like I say, enthusing about running to a non-runner is a fruitless endeavour. Still, if you ever find the words won’t flow, I urge you to get out there and give it go. It could really help you, erm, go the extra mile.