Marketers love Apple. But their adulation is curiously selective. Everybody loves the purity of the brand messages, but the near-total aversion to social media and content marketing gets a lot less attention.

Similarly, everyone can see that Apple’s relentless focus on the product is a big part of its success. But not everyone is willing to follow it down the road of pure product focus in marketing terms. Especially when it goes so far as to end up privileging features over benefits.

Let me show you what I mean with the campaign for the original iPod. 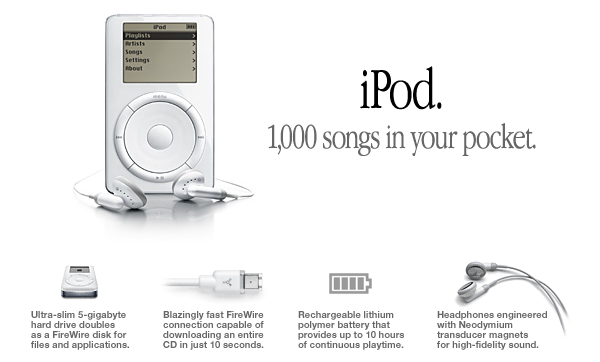 For me, ‘1000 songs in your pocket’ is a great line. Not just because of the actual words – I think many writers who sat with the iPod brief for a while might well come up with that, or something like it. The genius is in deciding to actually go ahead and run it. Not every brand, and not every CEO, would be happy to use something that sails so close to straight-out description. So when I call this great work, I’m ascribing greatness to all involved: Steve Jobs, Lee Clow at Chiat/Day and copywriter James Vincent, who actually proposed the line.

‘1000 songs in your pocket’. Now, is that a feature or a benefit? If we take it as referring purely to the capacity of the device, it’s a feature. If we sold luggage with the line ‘1000 socks in your suitcase’, we would feel we were describing the product rather than offering higher-order benefits.

What turns the feature into more of a benefit is its novelty. At the time, music players with hard drives were relatively new, so having 1000 songs in your pocket was an arresting claim.

However, it’s still not really a benefit. We can chase it down a lot closer to the customer’s heart. Why is it so good to have 1000 songs in your pocket? Because you can have music on the move, make tracks with tracks, a sound for every season, music for your mood, blah.

When is a feature not a feature?

The iPod could have been connected to the customer’s life and emotions in any number of ways, but it wasn’t. (Admittedly, the ‘silhouette’ TV ads did add more ‘experience’, while retaining the same line.)

Why not? Because to certain audiences, features are benefits. If you’re selling a new gadget to hipsters, ever-alert to cool new experiences, or early adopters who like to geek out over tech specs, features get their attention.

Knowledgeable audiences like this will translate the feature into benefits for themselves. There’s no need to be all up in their grill telling them why the product’s good. If you do, you’ll only insult their self-image as discriminating and intelligent consumers. Instead, you want to show rather than tell and let them join the dots.

The other great thing about features is that they’re honest, and that builds trust. You don’t stretch credibility by quoting facts and figures that are demonstrably true. But if you overreach with the emotive brand stuff, people will see straight through you.

She combs her hair

Staying with Apple, the range of iMac ‘flavors’ available was not really a benefit. After all, you could only choose one, and it was unlikely to tone in with your décor unless you painted your box-room lime green to match it (as I did). But to hipsters, designers and creatives, the fact that Apple had thought about the visual character of computer hardware for more than five minutes was enough to close the sale.

It’s not just tech that can be sold this way. If you were selling school uniform to pennywise parents, you might not get that much traction just by insisting that your stuff was ‘hard-wearing’. But if you mentioned it was made of tough polycotton with double-stitched seams, the credibility needle might move a bit.

To sum up, if you know for sure that the customer is literate in the features you’re describing, you might be better letting them infer the benefit rather than stating it. At times like those, features really do sell better than benefits.