Marketers have known for decades that people make decisions with reference to other people, which is why persuasion tactics such as authority and social proof are so powerful.

However, while the context of the decision may be social, the decision itself is still seen as individual. Mercilessly pummelled with marketing messages, the poor consumer peers out at a perplexing world from the prison cell of their mind, tormented by their own irrationality, and forever alone.

In this post, I’ll argue that while the actual buying may well be done by one person, buying decisions are often made by more than one. And that has implications for the way we sell to them.

This is most obviously true in B2B. Consider a middle manager researching an outsourced service like IT support. As they browse providers’ websites, they already know the decision won’t be theirs alone. They may have a preference, but they also have to sell their choice to others – most importantly, those who will use the service and those who will pay for it.

In fact, they’re probably hearing the whisperings of phantom stakeholders in their heads before they even share their ideas. Everyone touched by the decision affects its outcome, even if they never actually have any input into it.

This social dimension raises the stakes of B2B decisions. The right choice could mean advancement and praise, while a mistake risks failure, disapproval and buyer’s remorse. High stakes naturally make B2B buyers more conservative, as reflected in the saying ‘No-one ever got fired for buying IBM’.

Because of this, a good B2B website needs a structure and a tone of voice that can appeal to multiple readers at different points in the buying process. They all have a stake in the purchase, but the outcome will be different for each; like the blind men and the elephant, each can feel a different part of the same whole. 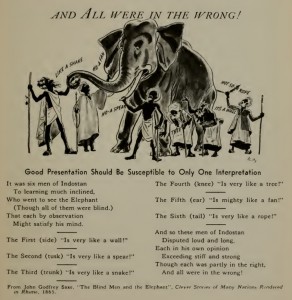 From Graphic Presentation by Willard C. Brinton (1939), via Idea Sandbox

This is probably why B2B tone of voice tends to devolve to the beige, lowest-common-denominator tone of a first meeting. It can also lead to some tough copywriting gigs, like drafting a quarter-page ad that has to appeal to two groups of people with completely different professional profiles.

The right approach there is to do two different ads, budgets permitting, and the corresponding solution online is to write different content for different people. For example, some conference sites feature ‘convince your boss’ pages that show the budget-holder the benefits of paying for someone to attend.

More subtly, you can just establish different themes for different people: business benefits for CEOs, financial benefits for CFOs and HR benefits for personnel managers, plus ease-of-use or practical benefits for those who will actually be using the product. As long as people can find the stuff relevant to their bit of the elephant, this approach works well.

However, it’s not just B2B purchasers who hear others’ voices in their heads when they buy. I think people buying consumer goods hear them too, particularly those with partners or families.

I rarely do our food shopping. So when I do, I wander wild-eyed around Waitrose like a hungry ghost, desperately asking myself where the olives should logically be, haunted by the stereotype of Hopeless Man. Even as I tentatively lift some probably-not-right item from the shelf, I can already hear the disappointed ‘Oh’ it will elicit on emerging from the green hessian bag.

If a man makes a statement in a forest, and there’s no woman there to hear it, is he still wrong?

Live with someone for a few years and your personalities entwine like adjoining plants. In many situations, you know just what your partner is thinking, even if they don’t actually say it. It’s not a question of who manages the money, or who ‘wears the trousers’, or even what you can afford, but rather a sort of pervasive mutuality of thought.

In a family, everything that’s bought must run the gauntlet of preferences and prejudices that may have been endured for generations. Flaming arguments and simmering resentments can arise over whether to keep the tomato sauce in the fridge, which way to hang the loo roll or which brand of toothpaste to buy.

I sliced the top off my boiled egg, which in a centre favouring tapping the top with a spoon and peeling the bits off was always calculated to annoy…
Keith Waterhouse, Billy Liar

For me, this cautions against marketing on functional presumptions (mum shops, dad gardens), arch war-between-the-sexes tropes or lazy stereotypes like Hopeless Man (or his wife, Scatty Woman). No matter who does the actual shopping, each purchase, apart from the most personal, must fit with the psyche of the whole family.

As Bob Hoffman has noted, marketers compulsively target young people, and neglect older consumers, regardless of what they’re actually selling. That’s partly down to the vanity of brands or marketers, wanting to appeal to those they see as sexy and glamorous. No doubt, it’s also because they want to be on sparkly new digital channels that only young people have got the time or inclination to use (Hello, Ello). But maybe it’s also because they imagine young people are simple.

In the imagining of someone older, 20somethings are individual, independent, autonomous, and as close to being ‘just themselves’ as anybody ever is. And because they’re carrying less cognitive baggage, it’s easy to hit them with a pure, straightforward message – which is, aesthetically, what we aspire to anyway. A simple message for a simple person: it’s just perfect.

Unfortunately, these fond yearnings may be sharply at odds with the way people actually see a brand. This was well illustrated by Dr Jillian Ney, one of the headline speakers at the recent PCN Conference. Using hard data gathered from social media, she showed that while BMW positions itself as ‘the ultimate driving machine’ (an individualistic boy-racer/gadget-fiend proposition), people in the real world actually link the brand with ‘family’ values such as safety. 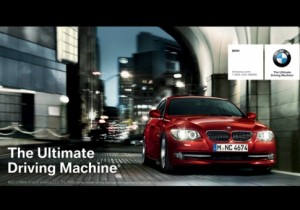 Intuitively, that finding makes sense when we think about who is most likely to afford a BMW. But it means that BMW, in their desire to be different from Volvo, are neglecting the very things that people most like about them. Brands are made of consumers’ thoughts, not marketers’.

Maybe that’s partly because it’s a lot harder to build a proposition that will click with a whole family than with an individual. Easier just to recruit Dad with a transparent appeal to vanity, and let him do the hard work of persuading everyone else.

You could even take the ‘convince your boss’ approach and give him the persuasive ammo he needs to clinch the deal. Of course, that would need to be done in a very subtle and witty way – the exact opposite of the approach in this appalling press ad from the 80s, for the long-forgotten Dragon 32 personal computer (click to view full size):

Fortunately, the tech industry has completely transformed itself in the intervening decades, and such chauvinism is now all but unknown.

Recent social-media research has shown that young people use the words ‘I’ and ‘me’ more, whereas older people increasingly say ‘we’ and ‘us’, which seems to confirm the idea of young people as being independent. But that’s only what they say, not necessarily what they think. I suspect they have just as many inner voices as the rest of us.

Every purchase decision is a combination of desire and permission.
Dave Trott, Creative Mischief

When you grow up and leave home, making buying decisions on your own can leave you feeling a bit bereft. Can you remember your first attempts at solo food shopping? As a first-year undergrad, ripping open yet another sachet of Batchelors Savoury Rice, I must have wished my mum was there to save me from scurvy with some sensible buying advice. At last, I had permission to buy whatever I wanted – but I didn’t know how to turn my desire for food into a viable supermarket shop.

Arthur Dent: You know, it’s at times like this, when I’m stuck in a Vogon airlock with a man from Betelgeuse, about to die of asphyxiation in deep space, that I really wish I’d listened to what my mother told me when I was young.
Ford Prefect: Why? What did she tell you?
Arthur Dent: I don’t know! I didn’t listen!
Douglas Adams, The Hitch-Hiker’s Guide to the Galaxy

At other times, head-parents are most unwelcome, and surprisingly eloquent about things that, as imaginary entities, they can’t possibly be aware of.

I’m also wearing an outfit that would make my mum scream YOU’RE 36 AND SINGLE AND YOU DON’T HAVE THE LEGS FOR THAT! — Joanna Bolouri (@scribbles78) October 1, 2014

I suppose this is the appeal of the personal shopper. Through their physical presence, they can blot out the voices you don’t want to hear, and add weight to the ones you do. They are ego coaches, encouraging you to follow your desires and reassuring you that you have permission to do so.

If there’s no-one around to help, whether in your head or in the shop, you can always fill the gap with social media. Just tweet a picture of the shirt you’re thinking of buying, or the snack range from which you must choose. The only problem is that the answers you get might only be based on ‘thin’ relationships, rather than people who have a real stake in the decision.

As I hope I’ve shown, no-one is an island when it comes to buying decisions. We choose everything with respect to other people – some who really are involved, and some who aren’t. But whether the voices we hear are real or ethereal, none of us buys alone.