Yesterday, the Motor Neurone Disease Association unveiled their new campaign. It presents the stories of MND sufferers alongside the hashtag #lastsummer, intended to refresh memories of last year’s viral smash ice bucket challenge while raising awareness of the condition. 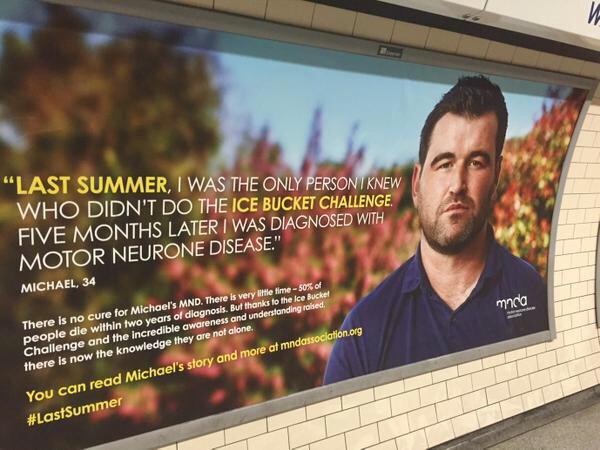 In case you can’t read the image, the headline reads:

Last summer, I was the only person I knew who didn’t do the ice bucket challenge. Five months later I was diagnosed with motor neurone disease.
Michael, 34

When I first saw it, I simply could not understand the message, or its intended implications. Why didn’t Michael do the ice bucket challenge? Did he, like me, fall prey to a potent cocktail of embarrassment, irritation and sheer laziness? And how were his reasons, whatever they were, linked to his MND diagnosis? Or was the point that there was no link?

I wasn’t alone in my confusion.

Soon enough, people began to fill the gap with their own interpretations:

@RyanJohnNelson @mndassoc I didn’t run the marathon for macmillan. Is that why I got cancer? Highly inappropriate wording. — elizabeth fischer (@lizzyf101) June 1, 2015

In the deafening echo chamber that is social media, opinions like this spread like wildfire. If you’re not sure what to think (like me), or even if you hadn’t seen the ‘thing’ before that very second, the RT button lets you instantly bring the outrage with maximum ease and minimal forethought. It’s the same snowball effect we saw at work with the reaction to the ill-fated Gap logo – and with just as little justification.

There’s nothing wrong with calling brands out for arrogance or hubris. But I don’t think that’s what this is. All we have here is a fatal failure to close a loophole in the mechanics of a campaign, generating needless blowback for both the charity and, indirectly, for Michael, who is a real person and frankly has enough on his plate.

The problem is that the headline can be (mis)read as complete in itself, when it’s actually a teaser. In a way, it’s not even meant to make sense in isolation. We have to go and ‘read Michael’s story’ to complete the picture. But of course, there are many reasons why people might not do that.

One of those reasons is storytelling fatigue, which I touched on here and here. We’ve now become very much accustomed to being asked to do things like ‘read Tom’s story’. But if we then find out that Tom’s ‘story’ is in fact a thin, inconsequential bit of marketing fluff, we’re less likely to read anyone else’s story, for whatever brand, in the future. With the best will in the world, we only have so much faith and attention to gamble on brand stories when we don’t know whether or not they’ll cash the cheque written by the ad that exhorts us to read them.

However, in this case, the story is essential, because it tells you that the bucketlessness of Michael’s summer was actually down to him getting married, rather than some sort of reckless I’ll-never-get-MND stance. (Read the full version here.)

Last summer Michael and Tracy Smith were busy getting married while the rest of the country was throwing iced water over each other… Just five months later and Michael was diagnosed with motor neurone disease aged 33.

Referring back to the bucket challenge is completely understandable on a tactical level. But juxtaposing the two points in the headline, with the chosen phrasing, is semantically fatal, because it supports the wildly inaccurate inference that Michael ‘deserved’ his illness for ignoring MND, or that doing the challenge would have somehow prevented it.

This is not how cause and effect works via @tomcopy pic.twitter.com/jKThLVfO6D

IT WAS AN INTERNET CHALLENGE FOR BELL ENDS, NOT A FUCKING INOCULATION. GET IN THE FUCKING SEA pic.twitter.com/91e8CafKG8 — Get In The Sea (@getinthesea) June 1, 2015

In fact, the underlying sense isn’t ‘Ignore our viral stunts at your peril’ – it’s ‘I was young and busy living my life and I never thought I’d get MND, until I did’. Beneath the viral trimmings, it’s an innocuous ‘this can affect anyone’ message familiar from many similar charity ads.

To be honest, I’m not sure how anyone could really think that a reputable charity would run an ad predicated on some sort of viral-video voodoo curse – but that’s internet groupthink for you. A strong opinion, vividly expressed, can easily sweep aside plausibility.

The agonising thing is that all this could have been made crystal clear with a tiny tweak to the copy. (‘Last summer, I was too busy getting married to do the ice bucket challenge…’) I can only assume this was an oversight, since everyone must surely, by now, be prepared for their ad to be circulated online as a rootless JPEG where you can hardly read the small print.

If the campaign is a deliberate attempt to force people online, then arguably there is some hubris there. Better to ‘close the sale’ (or solicit the support) right there and then, in the ad itself, instead of stretching the reader’s attention to an additional step. Also, if that was the aim, the call to action should have been different – not the casual, permissive ‘you can’, but something much more forceful like ‘to find out why…’

Overall, though, I think this is really just a case where, for want of a word, the message was lost.