Recently, I was chatting to fellow copywriter Kevin Mills (@bravenewmalden) about finding new business. The London agencies are Kevin’s main source, but increasingly his age counts against him. (He’s north of 50.)

A glance through Kevin’s portfolio reveals that most of his clients are household names. What’s more, his work has brought him a shelf-full of awards. (Like, Cannes awards. Not ‘Norfolk stationery marketer of the year’ – which will be mine before I retire.) 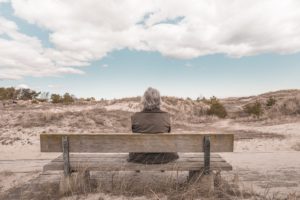 ‘The most explicit ageism I encountered was when a digital agency asked me to work on the tone of voice for a high-end car brand,’ Kevin told me. ‘As they explained on the phone, they wanted to make it younger, less “golf club”. I was up for that – but when we met in person, their attitude suddenly changed. Obviously, they put me firmly in the “golf” category, so it didn’t go any further.’

My career’s been more modest, but at 45, I can certainly sympathise. I recently lost a pitch because I failed to hit the right tone. There could be many reasons for that, but in my head it’s all down to my age. Next to my unseen-but-no-doubt-really-young rival, I must have sounded like a crematorium brochure from the 50s. The client was right not to use me. I wouldn’t use me.

The older you get, the more inevitable all this feels. But what are the actual reasons for clients to choose a younger copywriter – or, for that matter, an older one? Let’s don our slippers, spark up our pipes and have a good old think.

Why use a younger copywriter?

Well, one big reason is cost. Like other professionals, copywriters tend to earn more as they age. The 2016 PCN Survey found that both freelance and salaried copywriters’ earnings peaked in later middle age, declining slightly toward retirement.

Then there’s energy. At a basic physical level, young people simply have more zing. They’re not yet knackered out by endless DIY, 5am toddler wakings or chronic back pain. And they can bring more of that energy to their work, which is a pure positive.

Middle age: when you’re not sure you could actually be bothered to do whatever you’d rather be doing

For employers, a helpful consequence of youthful energy is speed. With younger creative teams in place, agencies can turn up the machine, getting more ads – or more ideas, at least – in less time. That’s the reality that freelance ad copywriter Jacqueline Steel (@arminthedoor) describes here – although she also makes clear that quality inevitably suffers.

Following on from energy is vivacity. Because their spirits have not yet been broken by duty and disillusionment, the young can bring more joie de vivre to the work. If I wanted someone to write from the heart about exciting potential and boundless possibility, I’d choose someone young.

Then there’s alertness. With fewer obligations and more energy, young adults have more time and attention to devote to more interests. They’re in the know, down with trends, savvy about culture – or youth culture, at least. They’ve got the ‘broad but shallow’ knowledge that can be such a big help to the copywriter working on multiple briefs and brands.

Shallow knowledge implies naïveté, which I’m regarding here as a strength. If you’re unencumbered by knowledge, you’re freer to experiment, with more self-belief and less anxiety of influence. Experience can become a straitjacket if you get stuck in ‘We tried that, it doesn’t work,’ or ‘Yeah, it’s a bit like [x]’. As Shunryu Suzuki wrote, ‘In the beginner’s mind there are many possibilities; in the expert’s mind there are few.’

However, as Kevin told me, historical knowledge can be an advantage when there’s less of a premium on originality. ‘These days, there’s a sense that all the great ideas have been done, back in the golden age of the 70s and 80s,’ he notes. ‘So people aren’t so fixated on pure creativity. Even some creative directors don’t seem to mind if something similar has been done before.’

Other reasons to choose younger creatives are less rational, more to do with the appeal of youth in itself.

Bob Hoffman (@AdContrarian) has often written about marketers’ obsession with targeting the young, despite solid evidence that it’s actually older consumers who have the money – and constitute a growing demographic, too. If clients insist on building ‘youthful’ brands, as Bob suggests, it probably makes sense for agencies to have youthful teams. And if agency founders and managers aspire to have a ‘young’ workplace – to feel younger themselves, maybe, or to outshine industry peers – they’re hardly going to argue. The reduced wage bill is the icing on the cake.

After a few years of recruiting like that, the older perspective will hardly enter the picture, not even when marketing (for example) cars – where, as Bob notes, most customers are over 50. It’s a vicious cycle: brands that want to be young ask young creatives to target young consumers with young ads, and measure results accordingly. Suddenly we’re living in Logan’s Run.

Why use an older copywriter?

Now on to the, er, more mature copywriter. What can they offer, beyond knackered knee joints and a deep love for 70s rock?

The obvious one is experience. Older copywriters have worked in more places, written for more brands, thought up more ideas, cranked out more words. They’ve seen more great work from which they can (cough) draw inspiration. They know what works and what doesn’t. And that gives them strength – not the blithe self-assuredness of youth, but the hard-won resilience of the old soldier.

Middle age: when you can draw on decades of experience, but can’t remember tasks from one room to the next

That’s what Paul Belford (@Belford_Paul) argues in his piece for Creative Review. He comes right out with it, asserting that older creatives are simply better, and that agencies are deeply ageist for ignoring them. Citing a killer Volvo ad written by David Abbott in the 26th year of his career, Paul contrasts Abbott’s quality-first philosophy with the miserly cheeseparing of holding companies.

However, we’ve got to be clear over causes and effects. Ageism is outright prejudice, but recruiting young to save money is a financial decision. Penny-pinching could look a lot like ageism without managers necessarily despising older employees.

Also, if we’re going to argue that older work is better, we have to acknowledge that the creative life was different back in the day. We can’t say ‘old writers rule’ on the one hand, while admitting that younger ones face massive pressure on the other. Don’t hate the player; hate the game.

Finally, experience also gives the older writer perspective. In his recent LinkedIn post, Tom Goodwin (@tomfgoodwin) says that by neglecting those over 50, ad agencies have sacrificed wisdom and gravitas. Only older heads, he suggests, can see new trends in historical context. It’s not just creative work that suffers when everybody’s young – the entire organization is diminished, enfeebled by the pursuit of short-term trends.

So, what’s the final score?

The truth is that anyone can do great work, given the right brief and conditions. The younger copywriter might come up with a lively, zeitgeisty idea that blows away cobwebs and expands horizons. And the older one might come up with an inspired execution of a classic format, rejuvenating it for the digital age. Either piece could be a creative and commercial winner.

All else being equal, then, the agency might be forgiven for going with the cheaper option. But they’d be missing the real advantage that older copywriters offer: not experience of work, but experience of life.

You’d think he’d be an obvious choice to write for brands with similar appeal. But his agency contacts clearly don’t see it that way. Cost aside, they presumably feel younger writers are stronger across the board, regardless of brand, product or audience.

Some copywriters maintain that ‘anyone can write for anyone’ – and, indeed, that this is a basic requirement of the job. Others concede that shared experience between copywriter and reader might well improve the work. I mean, it couldn’t hurt, right?

I’m certainly not going to lay down the law over who should write for whom. If the client wants you to write it, you write it – and I hope you knock it out of the park. But for me, it’s self-evident that the closer your own experience is to your reader’s, the more persuasively you can write for them. Even if you’ve only experienced something a bit similar, that’s still better than nothing.

If you accept that, you have to accept that older copywriters are more likely to have been there and done it. They’ve driven those Audis, bought those Led Zep remasters, trudged around those boring Peak District walking holidays, applied those topical ointments.

Older creatives might have less va-va-voom, but they’ve been around the block. They’ve seen more friendships built and broken, witnessed more relationships bloom and wilt. They’ve bought more stuff, tasted more dishes, visited more places, heard more records, seen more films. They’ve got more hindsight to get the benefit of, more perspectives to see things from. Assuming they can still remember it all, they simply have more experience, in absolute terms, to draw on.

As a result, they appreciate that older people aren’t some weird alien species – just human beings like you and me, who happen to have been around for a bit longer.

A campaign created by kids, no doubt.

Shame on you @PostOffice. pic.twitter.com/RGfSXdWP96

The same goes for B2B marketing. The older copywriter may not have run their own company, but they may well have freelanced, or watched their agency develop, for many years. They may have dealt with senior figures from dozens of different clients. That gives them insight into how businesses work, how they buy and use services, what makes them tick. What’s more, the directors and managers they’re writing for are likely to be around the same age as them, which could make it easier to build rapport and command respect for the creative process.

To sum up: if experience counts, and age broadens your experience, then ageing can only make you a more versatile writer – and maybe a better one too, for some briefs at least.

Missing out on work always sucks – particularly for reasons you can’t help, like being old. But hey, things could be a lot worse. After all, as Tom Petty put it, ‘If you’re not getting older, you’re dead.’