Have you ever imagined meeting yourself?

In Robert A. Heinlein’s 1941 sci-fi novella By His Bootstraps, Bob Wilson is taken through a ‘time gate’ by Diktor, an older mentor, to another world.

Once there, Wilson escapes Diktor by using the gate to travel back 10 years, and steals his knowledge to become lord of the planet.

But then his younger self turns up, and Wilson realises that he himself was/is Diktor, and the cyclic time paradox is complete. 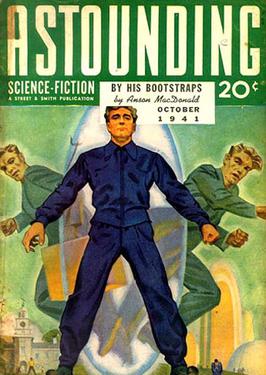 ‘By His Bootstraps’ featured in ‘Astounding Science-Fiction’. Heinlein used the pen-name ‘Anson MacDonald’

Professional life is like this. You borrow some knowledge from here and there, but mostly just keep going along, doing what you do.

Then, before you know it, people start asking you for advice. To you, your answers seem obvious and banal. But people seem to like them. (Your younger self would have liked them.)

You have become the expert. Or, perhaps, the expert has become you. Time and knowledge flow through you like water under a bridge.

However, convincing others doesn’t necessarily mean you’ll convince yourself. Inside, you may feel like a fake, or a fraud.

What you have to remember is that everyone is faking it. All authority is a performance. At some stage, every expert has to fake it ’til they make it – or, rather, fake it so they can make it.

Like cyclists, knowledge workers can only move by balancing, but must balance in order to move.