When I overheard those words in the dinner queue on my first day at Bournville School, I truly knew I had arrived in another country. That summer (1980), we’d moved from Norwich to Birmingham, uprooting me from a sleepy cathedral city (to which I’d later return) and pitching me into a bustling multicultural conurbation.

Over the next few months, I had to get up to speed with the playground lingo – fast. To save you the trouble if you find yourself in a similar situation, here’s a brief guide to the second language of the second city.

Ace adj. Excellent; bosting. Not confined to Birmingham, but used incessantly when I was at school there. The wonderful Brummie accent renders this word closer to the way southerners say ‘ice’.

All right A standard greeting, often delivered more as a statement than a question (‘All right, Tom.’). The correct response is ‘all right’. It is not necessary to give any information concerning your welfare.

Austin, The n. The former Austin Rover/British Leyland plant at Longbridge, later MG Rover and currently being completely redeveloped. You often heard of people who worked ‘up the Austin’, before they all got laid off. I think people might also have said ‘The Rover’.

Babby, bab n. Literally, a baby. Figuratively, ‘bab’ is a term of endearment or friendship; combine with ‘all right‘ to give the greeting ‘All right, bab’. If you’re a barmaid, dinner lady or similar, you can get away with using it on strangers. Near-equivalent to ‘duck’ in the East Midlands, ‘luv’ in the north, ‘darlin’ in the south and ‘hen’ in Scotland.

Back of Rackhams n. A mythical red-light district. Rackhams is a large department store in Birmingham city centre, now owned by House of Fraser. To ‘go round the back of Rackhams’ meant to work as a prostitute.

Banjo vt. To strike someone, probably in the face. ‘He was asking for a smack so I banjoed him in the gob.’ Possibly related to ‘banjax’?

Batter vt. To beat soundly in a scrap. Also used hyperbolically for any sort of skirmish, however minor.

Benny n. A simpleton, like Benny out of Crossroads. Paul Henry, who played Benny, apparently lived near us, but I never saw him shopping at the Grosvenor Centre. Probably one of those playground myths.

Bomb vi. To travel quickly, usually on wheels (e.g. a bike or skateboard). ‘Let’s bomb down the outdoor for some rocks.’ (Note that ‘to’ is often omitted from phrases such as ‘down to’ or ‘up to’ when speaking of travel.)

Borrow vt. To lend. ‘Can you borrow us 10p for the buzz?’ In the early 1980s, you could ride anywhere in Birmingham for 10p during off-peak hours. The lowest fare was 2p, which I remember people asking for by saying ‘One stop please, driver’.

Brassings n. pl. Like gruffings, this taunt indicated that your interlocutor had been proved wrong somehow. Accompanied by a twisting finger applied to the side of the neck, and sometimes a ‘tsss!’ noise, like water falling onto a hotplate. Possibly derived from ‘brass neck’ somehow? 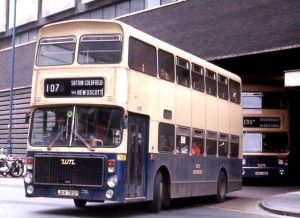 A Wumpty buzz, back in the day

Cob n. A bread roll, but not only in the Midlands. Also, to ‘get a cob on’ is to go into a huff or become mardy.

Cop vt. To apprehend. Almost always used in the passive voice, e.g. ‘They got copped dossing about in L21 during break’.

Crash vt. To distribute generously. Hence ‘Crash the rocks!’ – an invitation or instruction to hand out your sweets to those present, or ‘crash the ash’ if you’d graduated to cigarettes.

Crip n. A potato crisp (US: potato chip). For some reason, it was customary to omit the ‘s’.

Damo n. Pronounced ‘day-mo’. A pupil of Dame Elizabeth Cadbury, the nearest comprehensive to Bournville and therefore its de facto rival. We were always hearing about, but never witnessing, scraps between kids from the two schools.

Deck n., vt. As a transitive verb, to knock someone to the floor. As a noun, the floor or the ground – hence our PE teachers telling us to ‘put the pill on the deck’ to score a try. (Bournville was a rugby, not a football, school.)

Deff vt. To decide against, not bother with or opt out of. ‘Let’s get some rocks!’ ‘Nah, deff it man.’

Doss vi, n. As a verb, it means to mess about and/or waste time. ‘They spent all of General Studies dossing around in the library.’ As a noun, it denotes an opportunity for, or specific instance of, dossing. ‘General Studies is a total doss.’

Fizzy pop n. A carbonated soft drink, e.g. lemonade or Coke. The ‘fizzy’ was to differentiate it from simple ‘pop’, which denoted fruit squash.

Gambol n. A forward roll. A usage sufficiently well established to be deployed by our PE teachers.

Good kid n. A sort of juvenile equivalent to compliments like ‘good bloke’ or ‘decent chap’, but with a slight undertone of Top Trumps-style comparison. Needless to say, the ‘kid’ was always male. I don’t know how, or whether, the girls evaluated each other.

Gruffings n. pl. As a taunt or exclamation, ‘gruffings’ indicated that your interlocutor had been shown to be wrong, ignorant or inferior in some way. It was normally accompanied by a chin-stroking hand gesture on the thrust-forward lower jaw, evoking the beard of a billy-goat gruff. See also Brassings.

Island n. A roundabout – on the road, rather than in the playground.

Jacksy adj. Lucky. Elsewhere in the UK it’s a synonym for ‘arse’, but not in Brum. ‘You got out of PE? You jacksy bastard!’

Kalas, The n. An area of tussocky grassland near the Kalamazoo premises in Longbridge. Boys went ‘down the Kalas’ to ride their bikes off-road.

Lamp vt. To banjo, i.e. punch someone. I don’t think this is Birmingham-only.

Mardy adj. Sulky, peevish or irritable. (Not exclusive to Birmingham.)

On a line To be ‘on a line’ with somebody is to be exasperated or fed up with them – to have a cob on, in fact. ‘Your mum’s on a line with you.’

Outdoor n. An off-licence (US: liquor store). None of these near my school though – the Cadburys, staunch Quakers, forbade alcohol to be sold anywhere in Bournville, a rule still upheld today.

Peg vi. Synonym for leg, as in ‘peg it!’ However, this could not be a transitive verb, i.e. you could not ‘peg’ someone one in the the same way as you could ‘leg’ them.

Penguin n. Old-style overhead projector, with a flat glass screen for transparencies and a refracting prism above it on a metal rod. Probably not just Birmingham.

Piece n. A slice of bread and butter. Something to accompany your scraps, perhaps.

Red sauce n. Tomato ketchup. A determinedly literal extension from ‘brown sauce’ (HP or maybe Daddies’ Sauce). Incidentally, HP Sauce was made at a plant in Aston until it was demolished in 2006. You could see it from the A38 while en route to Spaghetti Junction.

Rock n. Confectionery item, hence ‘rocks’ meaning sweets. Normally applied to individual sweets such as Polos rather than bars such as Twix.

Round the Wrekin To ‘go all round the Wrekin’ is to take the long way round to a destination. The Wrekin is a prominent hill near Telford in Shropshire, so going round it would be a serious detour if you were going to, say, the swimming baths in Stirchley.

Scramble vt. To crash your rocks by throwing them into the air in the classroom or playground. Only really worked with wrapped sweets, e.g. Opal Fruits. Accompanying shout of ‘Scramble!’ optional.

Scrap n. A fight, usually one-on-one. At school, the slightest physical altercation would instantly result in the combatants being surrounded by a ring of excited onlookers chanting ‘Scrap! Scrap! Scrap!’

Scraps n. pl. The little particles of potato and batter scraped out of the fryer in a chip shop. Elsewhere called ‘crispy bits’, I think.

Sixties n. pl. The buzzes numbered 61, 62 and 63, which connected south-west Birmingham to the city centre via the Bristol Road. (And probably still do.)

Start vi. To fight. To ‘start on’ someone was to attack them. Boys squaring up would incite each other by saying ‘Come on then, start!’ – usually for about ten minutes, without any blow being struck, until a teacher arrived.

Stick prep. Versus. For example, a playground game might be convened with ‘It’s boys stick girls’.

Terrapin n. A mobile, prefabricated building used as a classroom. There were none at Bournville, but two at St Laurence Juniors, which I attended very briefly. In fact, I met my (still) best mate in one on my very first day. Although I didn’t know it at the time, ‘Terrapin’ is a brand name that became a noun.

Wag it vi. To play truant.

This post has suddenly gone viral on Facebook, thanks partly to being shared by Miles Hunt and Fuzz Townsend (Google them, kids). Since so many people suggested new entries, I’ve decided to add them into the main post, whether or not I remembered them myself, along with a few others that have come back to me. So this is now more of a compilation, not just my own memories. Thanks to everyone who commented.