Recently, I ‘fired’ a client whose expectations I couldn’t meet, amicably abandoning the project after a single draft without asking for payment.

They were an office-supplies company who wanted a sales letter. Their sector is highly competitive, with buyers needing a strong incentive to switch suppliers, whether financial or otherwise. Without big savings or super service on the table, it’s not worth taking a chance on a change of supplier.

My client had a strong sell. Reasoning that their target audience (purchasing professionals) wouldn’t want to waste their time with silly wordplay, irrelevant metaphors or high-flown ideas, I went for a tight, concise list of reasons to choose them. Not a word was wasted; every sentence communicated a real, concrete benefit. Structurally, the letter was very similar to the very first example given in Drayton Bird’s Sales Letters That Sell – a letter that pulled in billions for American Express.

The client didn’t like it. They wanted something more different from their existing stuff – something more ‘creative’. Since I’d submitted my best, most practical solution, it seemed more ethical (and far easier) to walk away than to wilfully write something I didn’t think would work.

I’m sure someone else will be able to help them. As I’ve blogged previously, there are lots of different types of copywriting and copywriters.

Although I do use the word ‘creative’ on this site, creativity isn’t a big part of my value proposition. I always hope that prospective clients will be able to discern my strengths from my experience, samples and clients: long copy, tone of voice, corporate, business-to-business, online.

With a publishing background, I’m much more suited to larger projects where structure, tone and usability are important. If you want professional yet informal, informative yet accessible, I’m all over it like a cheap suit. And I won’t start whimpering if I have to manage a project with 100 keywords, 1000 images or 100,000 words. But if you want a three-word slogan for Apple Tango, I’m probably not your man. (I’d probably suggest ‘apple bubble solution’.)

But it’s not just about horses for courses. I’ve always been uncomfortable with the whole concept of ‘creativity’. Let me try to explain why.

The creative answer isn’t necessarily right. If something radically new will communicate or sell better, then it’s the right way to go – and you need someone who can deliver it. But there are many situations where innovation just isn’t needed, and many very competent professionals who do a lot of great work without being ostentatiously ‘creative’. Their stuff might not win awards, but clients love it, and it works for them too. I know a freelance designer who has always loudly insisted she’s not creative; she’s consistently in demand. She gets things done.

When creativity falls short, it can do more harm than good. Management thinker Edward de Bono proposes three ways in which creativity can fail, one of which is ‘crazytivity’: coming up with an idea that seems very creative, but actually has little value. As de Bono says:

Creative people often solve many problems – except the one they have been asked to solve. The combination of low novelty and high value is always more important than that of high novelty and low value.

Everyone is creative somehow…

Are some people creative, and others not? Listening to some marketing professionals talk, it’s as though the world were divided into creatives and, presumably, ‘uncreatives’ – like priests and the laity, or saints and mortals. And woe betide you if you try to direct or criticise the creative, for they work in mysterious ways.

Life isn’t really so black and white. Every job – every human activity – has a creative dimension, or can be done creatively. And every person has innate creativity that they use insofar as they are able, putting it into the task at hand. Looking after a household or a family, fixing things, making food and hundreds of other tasks all benefit from creative thinking. It’s not just artists who have new ideas that can educate, help or inspire those around them.

…but peak creativity is rare

Having said that, there are some professional people who can consistently find radically new, clearly superior or aesthetically delightful solutions to the problems they face. They are highly creative in the strictest sense of the word, using their imagination to bring something totally new into being – and add enormous value as a result. 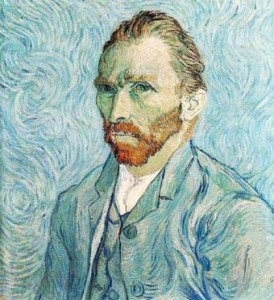 'Vince, the client wants to make some of the flowers blue. Could you do that before tomorrow's meeting?'

Such people are rare, as Ad Contrarian recently noted. I’ve only met one in my life so far, a graphic designer. His approach was completely different from every other designer I’d ever met – always rigorous, always uncompromising, always surprising. Having worked in top London agencies, he went freelance, then eventually quit design and now works in retail – I think because few clients or managers could live up to his standards.

The rest of us, and I include myself, should really think long and hard before describing ourselves as ‘creative’. But many are only too keen to give themselves the label, regardless of ability, as this article at The Onion notes.

Many’s the time I’ve shaken my head over a so-called ‘creative concept’ from an agency chosen by one of my clients. Such agencies are lucky that so many firms are happy to pay for something ‘creative’ without looking too closely at the strength of the ideas, the benefit they’ll deliver or indeed the effort that’s gone into them.

But the self-delusion doesn’t end at self-image. Having declared themselves ‘creative’, some individuals come to see themselves in an almost messianic light, blessing the poor client with their genius. From there it’s a short step to berating those unenlightened clients who can’t understand or accept their ‘challenging’ ideas.

This defensive stance is an admission of failure. Communication is the responsibility of the speaker, not the listener. If people don’t understand you, you have not expressed yourself effectively. Geniuses like Van Gogh are misunderstood; the rest of us just haven’t tried hard enough.

Moreover, contempt for the client is a shaky foundation for a productive relationship. Although most marketers (including me) have lamented the client who ‘doesn’t know what’s good for them’, we have to give clients the benefit of the doubt until we’ve walked a mile in their shoes. Are we so sure we’d think differently in their position?

The defensive, ivory-tower mentality of some creatives might have its roots in higher-education establishments where art and work are seen as opposite, not complementary. Graduates in creative disciplines are forced to ‘sell’ and ‘compromise’ their skills, which breeds resentment.

For some creative graduates, the slings and arrows of real-world business never shake the idea of creativity as a panacea. When you’re a hammer, the whole world is a nail. But true creatives have the confidence to know when creativity is needed, and when it’s not. For them, creativity is a tool rather than a mask.

Socrates said that ‘the unexamined life is not worth living’. I think the idea of creativity should be first up for examination.

We shouldn’t be asking ‘is it creative?’ but ‘is it effective?’