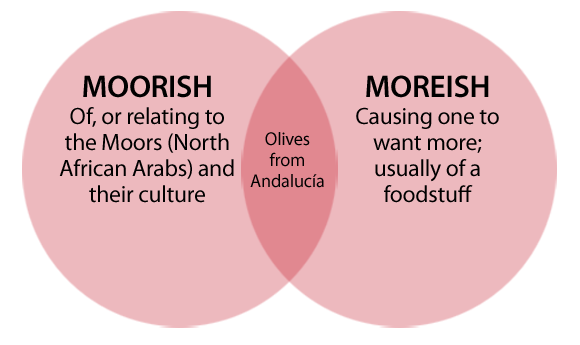 The difference between 'Moorish' and 'moreish'

The difference between ‘Moorish’ and ‘moreish’ (or ‘more-ish’) has been bothering me for several years now, ever since olives prepared in Andalucían style began appearing in UK supermarkets and wine bars.

Originally, such olives were labelled ‘Moorish’, because they originated in Mediterranean countries whose cuisine is influenced by Moorish cultures.

However, people couldn’t stop eating them, which soon gave rise to a confusion with the made-up term ‘moreish’, which simply means ‘making you want to eat more’. Some people use ‘Moorish’ and ‘moreish’ interchangeably, as if they were alternative spellings of the same word. They’re not.

In fact, as my Venn diagram above makes clear, only very rarely can they both be applied to the same object: we’re talking about a very small group of snacks and tapas originating from what was once Moorish Iberia. In most cases, something is either influenced by North African Arab cultures, or compulsively munchable, but not both.

Thanks for indulging my pedantry.