Google, the US corporation that already dominates the online search industry, is expanding its operations to a new frontier: the human mind.

Having indexed everything ever written, Google has taken the logical next step and introduced Google Life, its technology for scanning our thoughts, memories and dreams.

‘Google is great for finding out who played bass in Showaddywaddy, how many pounds there are in a monkey or Inspector Morse’s first name,’ notes Mark Snips of Google. ‘But, until recently, it was no help with finding your car key, remembering the name of your niece or putting a name to that restaurant in Madrid you really liked.’

Now, people who find Bing by Googling ‘bing’ can bring the same staggering laziness to their own thought processes.

‘Many Google users are frustrated that they can’t Google the contents of their homes, lives or brains,’ says Mark. ‘They don’t see why they should have to memorise personal facts when they haven’t had to remember anything about the real world for over ten years. And that’s the next frontier of development for us.’

Some observers feared that the mind-scraping indexation process might be intrusive, or even painful. In fact, no surgery or physical intervention is required.

Instead, Google will be installing 100m-high antennae at intervals of 10–20m in all residential areas. The poles emit a muted hum, a cheery green glow and a low level of non-fatal radiation. Each one bears a humorous variation on the Google logo. The company hopes that the so-called ‘mind-masts’ will occupy the same place in the UK national psyche as old village signs, or red telephone boxes.

‘Brain-spidering’ occurs once an hour and is detectable only by a slight tingling sensation around the base of the skull. Users may also experience some hallucinatory phenomena, anecdotally compared to the sense of life flashing before one’s eyes. ‘It’s really no worse than an acid flashback, or a mild psychotic episode,’ says Mark Snips.

Having been scanned, the raw mental data is transmitted to Google’s processing centre. ‘Obviously, we need a way to separate the wheat from the chaff,’ says Mark. ‘For example, although Twitter users might disagree, you probably don’t need an online record of every shave, cup of tea or visit to the loo you’ve ever had. But at the same time, some of those everyday experiences might have sentimental value. So we’ve developed a proprietary algorithm to rank memories based on how many times they’ve been recalled, and with what emotional intensity.’ 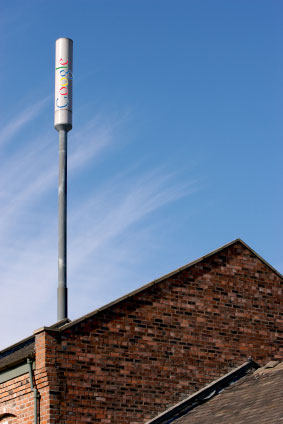 A Google ‘mind-mast’ in a residential area

Once prioritised and encoded, your favourite holidays, proudest work achievements and most exciting romantic encounters can all be viewed online. Users can comment on and rate your memories and dreams, or share them through social-media networks.

Mind contents are made public by default, although users can opt to restrict access through a simple system of 57 privacy options. ‘In 2010, Facebook showed that people don’t really care how their most intimate secrets are being shared with billions of strangers,’ observes Mark. ‘And that means we can leverage these mental assets commercially, through a range of channels.’

To kickstart the development of so-called ‘head-apps’, Google plans to make brainscan data available via an API. ‘Once your brain’s IP address is paired with that of your browsing device, the potential is incredible,’ enthuses Mark Snips. ‘For example, a takeaway ordering site like Just-Eat would be able to offer you a menu tailored to your past eating patterns, current mood and available gastric capacity – even if you’d never visited the site before. It’s a real game-changer, bringing the functionality of the Nutrimatic Drinks Dispenser within the reach of every website.’

However, interpreting the raw data is likely to prove challenging. ‘It can be a problem filtering out all those thoughts that aren’t relevant to the task at hand,’ admits Mark. ‘But even that opens up immense potential for interruptive marketing attuned to what people are really thinking about. The owners of adult and shoe-retailing sites are very excited.’

Fantasies and hopes about the future are also indexed, so women going on dates can Google their suitor and discover exactly how he’s hoping the night will end. ‘You can also liven up boring meetings by checking what your colleagues are thinking about you on your iPhone,’ Mark explains. ‘It brings a whole new edge to performance appraisals.’

However, past thoughts can only offer so much insight. The next stage of Google Life development is Data-driven Desire Prediction, or DDP. ‘Using thiotimoline batteries hooked up to our servers, we can now deliver search results before the user has even decided what they need at a conscious level,’ reveals Mark. ‘Holiday tickets, DVDs and new clothes will simply arrive, unbidden, at the exact second you first realise you want them. And with the installation of a special code snippet in your brain, you can even learn the exact time and circumstances of your own death – then post it on Facebook.

‘It’s a truly inspiring vision of the future,’ reflects Mark. ‘Nothing, anywhere, will be just your own – ever again.’