Before you play two notes, learn how to play one note – and don’t play one note unless you’ve got a reason to play it.
Mark Hollis

The recent Guardian Q&A on ‘breaking into copywriting’ featured 11 copywriter hosts, including me, plus guests.

In just three hours we generated a record 385 comments or around 30,000 words for young writers to chew through. I’ve edited books that were shorter than that.

No wonder one of the aspiring copywriters Tweeted that she was ‘still spinning’ with ‘information overload’. You and me both! 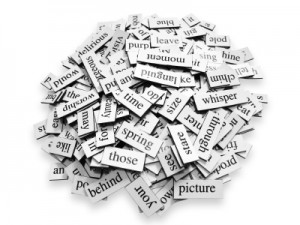 During the Q&A, distinguished copywriter Oliver Wingate stopped by and made one post.

I can still remember it, almost word for word. (No, I’m not going to quote or link. If you care enough, you can go and find it.)

Later, I headed to Oliver’s site and read his thoughts on ‘unwriting’: removing superfluous words rather than writing new ones. As he says:

There’s just too much words in this world and it’s a shame that people aren’t more careful with them.

That rang true for me. I realised that I didn’t want to be scrambling and scrolling through the Guardian’s unthreaded blog, blurting out wordy, hasty responses to questions I’d answered in the same event a year earlier. I wanted to make a telling contribution, not a yelling one.

Most of the content of the Q&A was the usual stuff about impressing people and getting them to give you money. But what did the form of the discussion say?

If the medium is the message, our message was ‘hey, write loads – some might stick.’

In his follow-up post on the Q&A, Oliver noted that ‘voices arguing against writing needlessly were few and far between’. He also made the link between copywriting and poetry:

The connection between copywriters and poets is something of an old cliché, I fully appreciate that. And it was alluded to yesterday as if it was some kind of affliction, or indulgence. But the two are closely related, because they’re about compression, reducing to the bare minimum…

Copywriters who have not learned about this connection with poetry, or who refuse to learn about it, don’t deserve to be called copywriters, in my view…  I don’t see why we should proliferate words for people, when they’d be much more grateful to you for brevity.

Oliver’s post crystallised thoughts I’ve been trying to express for a while.

With care and forethought, the poet puts a lot of meaning into a few words. Having unfolded that meaning, readers are changed. From that moment on, they think differently in some small way. And that’s just what copywriters want to achieve. The motive might be different, but the means and the end are the same.

I asked two of my fellow copywriters, who also write poetry, for their thoughts on that idea. Here’s Rishi Dastidar:

At root, both my poems and copy are trying to get the reader to do something: to call a number, to click on a link, to remember an emotion, to trigger a memory. And that generally means some deftness and some sort of beauty needs to be in there…

As poets we want to find language that lodges in the memory, articulates things we can’t easily do otherwise. Any good copywriter, whether consciously or not, should be doing this already.

Mark Owen, who trades as I Do Words and writes poetry as Mark Antony Owen, sees common elements but feels that copywriting and poetry should stay separate:

A beautifully crafted piece of copy could almost be a ‘found’ poem, and be no less valuable artistically for that. But generally, I’d say the two disciplines are discrete, and should – in the main – remain that way.

Good poetry is not read once and forgotten. It demands attention, and repays it. It hangs around. It becomes part of you. Copy should be like that – something you read and re-read (or replay in your mind), finding more fascination each time.

You say I must write another book? But I’ve just written this one.
You liked it so much that’s the reason? Read it again then.
Stevie Smith, ‘To an American Publisher’

Poetry is concise. (That’s Stevie Smith’s whole poem above, not an extract.) But I’m not arguing for short copy, or long copy. I’m arguing for the right amount of copy – 500 words, 10 or three. Or none. Every word should justify its place, or be dropped from the team.

I blame my upbringing. Although I studied literature, I had any airs and graces beaten out of me by five years at a trade book publisher, where words were a commodity to be bent and shaped to fit the layout.

That prepared me well for a life as a jobbing copywriter who wasn’t all that creative – someone who bashed out the words, got paid, would never win an award and didn’t particularly care.

Anyway, who needs poetry as long as the copy sells? That’s what David Ogilvy, the overbearing, always-right uncle of modern advertising would say.

Until recently, I’d have agreed. Authoritative rationalisation for a situation I can’t change? Yeah, I’ll have some of that.

But I thought again when I read the famous Hey Whipple, Squeeze This by ace US copywriter Luke Sullivan. The book’s subtitle, ‘A guide to creating great advertising’, which at first seems throwaway, actually embodies Sullivan’s whole position. We should create (not just do) great (not just OK) writing – or at least try.

Here he is on the creative process:

Eventually, you get to an idea that dramatizes the benefit of your client’s product or service. Dramatizes is the key word. You must dramatize it in a unique, proactive, compelling, and memorable way.

We may see our writing as poetry or drama, but the point is we aim for something that has resonance or appeal beyond the product it’s written about – but without becoming irrelevant or indulgent.

Earlier in his book, Sullivan tackles head-on the argument of sales vs quality, quoting Norman Berry, who was a creative director at Ogilvy & Mather:

If sales are achieved with work which is in bad taste or is intellectual garbage, it shouldn’t be applauded no matter how much it sells. Offensive, dull, abrasive, stupid advertising is bad for the entire industry and bad for business as a whole. It is why the public perception of advertising is going down in this country.

Copywriting shouldn’t just add value; it should have value. It’s part of our economy and our culture, and that brings responsibility. While I still believe the idea of ‘creativity’ can be unhelpful, I do think we should always do the best work we can.

Even Ogilvy himself quotes this:

When you reach for the stars, you may not quite get one, but you won’t come up with a handful of mud either.
Leo Burnett

Will clients allow us to do ‘good’ work? Not always. But it won’t happen unless we want it to.

The adman’s ideal of tight, economical, poetic writing is fundamentally opposed to the way things work online. With no real publication costs and no real penalty for second-rate writing, you might as well stick that content on your site – what have you got to lose?

Sometimes it’s a commercial strategy. Knowing they can hit and miss, digital marketers and SEOs strafe the internet with as many words as they can afford. Some rank, some don’t; it’s a game of numbers rather than words. At the grotesque extreme is Demand Media, the content equivalent of carpet-bombing.

Broad-but-shallow coverage brings search benefits, which is why the Guardian wanted 11 copywriters all banging away at their Q&A: eight more pages of keyword-rich content for their site, and eight more URLs where banner ads could appear.

For smaller operators, it’s as much to do with excessive self-expression as commercial benefit. Some writers think we should blog every day. While that can certainly be justified on SEO grounds, true quality can’t be turned on like a tap. It takes time and, even when it doesn’t, revisiting and revising are nearly always worthwhile.

Draft, draft, draft, revise, revise, revise. In the same way that your copy needs to be hacked, finessed, cudgelled repeatedly into being gleaming and diamond hard, so similarly a poem has to be coaxed again and again into showing its true face. Any writer or poet who tells you they don’t re-draft a lot is a either a bad liar or a bad writer.
Rishi Dastidar

But let’s not point the finger. We all play the content game – or at least, anyone using the internet to generate business does. I do it myself when I publish potboiler posts like this, just to keep the blog ticking over, chalk up another URL, maybe get a link. It may be small, but it’s still part of the problem rather than the solution.

Let’s be honest. Most of what we call ‘quality content’ in digital circles is actually just adequate. ‘Quality’ means ‘good enough to rank higher than your competitors’, or ‘good enough to attract reader interest’. It rarely means ‘fascinating’, ‘hilarious’, ‘memorable’ or ‘heartbreaking’.

Few firms are willing to engage a copywriter at all. Of those who are, even fewer are willing to invest the time (i.e. money) required to produce something really distinctive. The idea that words are bought by the yard is just too powerful. Why would I pay £1000 for three words? (Answer: because if you get the right writer, no-one will ever forget them.)

Words can be a security blanket too. Use thousands and you feel you’ve covered everything; use a few and you feel exposed. On an intellectual level, everyone understands that the more you write, the less gets read – you’re diluting, not adding. But emotionally, it’s hard to bet it all on black.

Can any firm rise higher and sell more, just with content? I think so. The more I talk to business owners, the more I realise that every company, every brand, has a story – and a story can be made dramatic or poetic if you put in the effort. It may not be something that everyone wants to hear, but it will engage the relevant readers like nothing else can. And the journey starts with a refusal to accept second-best content.

Writing is more than writing

Being a writer isn’t just about writing. It’s about testing, editing and rejecting too. But more than anything, it’s about thinking: setting down the pen, or switching off the computer, and journeying inwards to find a great unexpressed idea. And that applies whether it’s a blog post, an advert or a B2B service website.

Although I’ve hardly achieved either aim in this post, that’s what my 1400 words boil down to: let’s write better, not more.