As my Twitter followers will know, I recently got stiffed on a debt by a client (or at least, they haven’t paid me yet, and time’s getting on). Since they are in another country, getting the money out of them would be a major challenge, so I’m inclined to let it go. It’s a shame, because I really enjoyed working on their stuff – though not enough, obviously, to want to do it for free.

When contemplating this kind of situation, which is mercifully rare, the thing that looms largest for me is the emotional cost of pursuing the debt. I’ve chased plenty of clients in the past (and taken one to court), and I found that the constant weight of resentment, paranoia and self-righteousness took a toll that ultimately outweighed the value of the actual cash at stake. And if I didn’t get the money at all (which I mostly didn’t), that just made it worse.

Maybe if you’re a more confrontational, hard-bitten character than I am – someone rather like Paulie in Goodfellas, with his ‘f— you, pay me’ – you might actively enjoy the debt-chasing process. But even if you do, you have to accept that you’re expending energy that might be better directed towards developing your business – or just serving some nicer clients. 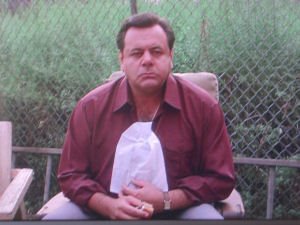 I’ve always felt that incorporating as a firm, and thinking of yourself as a business, is a positive step for freelancers. It creates a useful distance between yourself and your work; between your personal money and your work money; and between your emotions and what’s right for ‘the business’.

But this is one case where I think it’s OK to let emotions into the picture. As I’ve said, chasing a debt can put you through the wringer. If you’re longing to write it off just to be rid of the baggage, give yourself a break and move on. Forget the principle – and forget the money too.

Not all debts are equal. The value of the invoice comes into play, and this has to be weighed against the opportunity cost of pursuing it.

For example, if your unpaid debt is for two days’ work and you might spend a day chasing it, the net result will be, at best, one day’s pay. You could just as easily forget the debt, do a day for another client, build a useful relationship and get the same outcome.

Of course, you’ve still lost those previous two days, but those are what economists call sunk costs – they’re spent and gone no matter what you do. What matters is the choice you make now. Honouring or chasing sunk costs is a cardinal error; it’s the commercial equivalent of ‘throwing good money after bad’. And although you lose, remember that what is lost is ‘only’ your time; the money requested by the invoice was never yours, no matter how much you might have counted your chickens.

Revenge is a dish best not served at all

If the invoice is larger, you may feel that the extra time is worth it. But in my view, you should be absolutely sure that this on the basis of a financial or business calculus, not an emotional one. The quest to ‘show’ the client or ‘teach them a lesson’ is futile – if they cared about you at all, they’d have paid, and that won’t change just because you sue them. All you can do is turn passive indifference into active dislike. Respect can only be earned, not demanded.

A similar logic applies to the idea of ‘naming and shaming’ the client, which is much easier now with the advent of blogs, Facebook and Twitter. But again, what will you gain? You take yourself down to the perpetrator’s level, look a bit petty (to potential clients, among others) and ultimately gain nothing.

It’s the freelancer’s destiny to be jerked around; non-payment is just a more brutal manifestation of that eternal truth. So forget seeking revenge or trying to prove a point; it just binds you to an old situation and a rubbish client when what you need is closure and renewal.

In considering whether to walk away from a bad debt, it’s important to have a sense of proportion.

We have a natural inclination to focus on the dark side, often by letting one piece of bad news drive out hundreds of pieces of good news. Cognitive psychologists call this negativity bias.

Fortunately, an objective sense of proportion in money matters is quite easy to achieve. For example, by my very rough calculation, my bad debts to date represent 0.5% of my total turnover as a freelancer since I started out. So while it’s infinitely galling to have someone walk away from a debt, it’s crucial to see the bigger picture – the vast majority of clients are honest and pay without hassle.

Whenever I Tweet about a non-paying client, someone usually suggests demanding an upfront payment, and/or using a formal contract.

I can see how these approaches might limit the damage – or flush out potential miscreants before the dancing even begins. But the problem, for me, is throwing the baby out with the bathwater. I’m unwilling to impose delays and obstacles on every client because of the few bad apples, or make smaller projects top-heavy with administration. An email or even a phone conversation is legally binding, after all. And it would represent a waste of energy to red-tape the 99.5% of clients who pay without complaint – as with chasing debts, I could spend that time actively generating revenue.

Moreover, on a purely personal level, I simply prefer to do business on a basis of trust. Maybe that’s naïve, lazy or hopelessly weak. But at the end of the day, freelancing means being free to work the way you want and run your relationships the way you want. For me, that means picking my battles, sidestepping resentment and focusing as much time as possible on creating value. Paulie might not agree – but look what happened to him…