Those words, spoken by drug kingpin Stringer Bell in The Wire, could just as easily have come from Steve Jobs – a supreme businessman who knew that the product, and the experience of the product, was everything.

Just like a Baltimore crack dealer, Jobs knew how to deliver an experience so toothsome, so electrifyingly moreish, that the customer would queue up at midnight to pay over the odds for it – and thank him for the privilege. 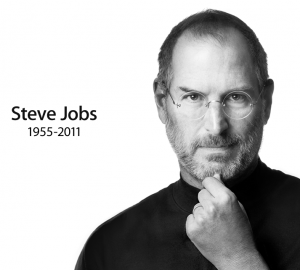 By making great product after great product, and learning from its own mistakes, Apple ended up building one of the world’s great brands.

By extending its philosophy of simplicity in design to its marketing, it created a tight, simple style that served its purpose admirably – getting that all-important product right up in our face.

For a company based in a garage to be exactly like its founder was obvious. For the biggest corporation in the world, it was astonishing. Jobs was there for every call, only letting go six weeks before he died.

As Bob Hoffman has pointed out, Jobs’ closed, introspective approach translated into a branding stance that is sharply at odds with modern marketing orthodoxy. Apple doesn’t ‘do’ social. It doesn’t engage. It’s remained resolutely aloof from social media, deigning only to create a defiantly unilateral Twitter account for the App Store.

Some might say Apple succeeds despite its isolation. I think it succeeds because of it.

Apple is like a star. A proper, untouchable, dazzling superstar. Someone who inspires the fiercest, maddest devotion in their fans, and never needs to explain or justify the moves they make.

Someone like J.D. Salinger, who captured adolescence perfectly on the page, never to write again. Someone like Morrissey, who stubbornly refuses to ‘cater’ by explaining himself or his lyrics. Someone like Michael Jackson, with his supernatural talent and otherworldly aura. And, of course, someone like Steve Jobs – surely the only CEO ever with such star quality.

To describe those people as ‘brands’ is an insult. But if they are brands, their key value is their mystery. Their mystique. Their aura. And Apple has the same aura.

Becoming a true star is incredibly hard. You’ve got to keep on delivering ‘insanely great’ experiences, year after year. You’ve got to keep your promises, every time. Then, after a while, you don’t need to prove anything any more. People believe in you; it seems to your audience that you just ‘know’.

On the other hand, falling from stardom is incredibly easy – all you have to do is let the edges of the user experience become frayed, diluted and disappointing. And even though people want stars to be stars, they can’t stop themselves trying to peep behind the curtain the whole time. The star brand must protect its followers from their own disillusionment – for their sake, and its own. If Syd Barrett had given in to the people who harrassed him while he was doing his garden, and gone on Parkinson or something, his legend would have been burnt out before the credits rolled.

That’s why Jobs rarely gave interviews, and why his firm keeps such a manically tight grip on everything from its ads to the experience of its stores. Stars belong only to themselves; they dictate the terms. They don’t engage because they don’t need to. They’re above all that. They’re to be apprehended from afar. They shine, we gaze – in awe.

In terms of product, I think Apple’s trajectory is pretty much set – for a few years, at least. If the people left behind can achieve 90% of Steve Jobs’ focus, Apple will be able to carry on bringing out products that people really love. But the real question is whether it can still be a star without Steve.