So begins another day of working alone in my office, not seeing anyone, not speaking to anyone. Yippee!

When I posted this tweet, several followers assumed I was being sarcastic. I wasn’t. For me, working at home, alone, has been one of the best career moves I’ve ever made.

I’ve always been happy on my own. As a child, I could often be found reading, drawing or building something out of lego. I learnt the piano, perhaps the supreme solo instrument. I always disliked team sports, and today enjoy running (alone, not races) rather than any group activity. And I’ve never really been one for joining clubs or socialising in large groups. 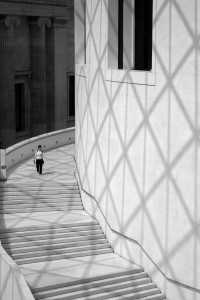 ‘In the museum’ by Scott Liddell

Basically, I hate people. But is that so wrong? It takes all sorts to make a world.

However, I never thought I’d be able to bring my sociopathy to my work – because, as a sort of publishing editor/project manager, I always thought my skills wouldn’t transfer to a freelance context. So I’d look at freelancers with envy as they walked out of the office to complete an assignment in their own way, at their own pace, and – most importantly – completely alone.

Fast-forward a few years, and I’m giving freelancing a try following redundancy. Immediately, the standard salarybod questions come out. ‘Isn’t it hard working at home?’ ‘Don’t you get lonely?’ ‘Is it hard to discipline yourself?’

No, no and no. I’m right back in a groove I’ve been dancing to since 1976. People give me the work and I go off and do it, only very rarely submitting to a meeting or a conference call. And, having been raised on the uncompromising demands of Technical Lego, I don’t find myself sneaking downstairs to watch reruns of Knot’s Landing.

Also, it quickly becomes apparent to me that what salaried folk call ‘work’ is actually a bit thin. Take out the lunchtimes, coffee breaks, loo trips, emails, company admin, meetings and impromptu friendly chats and it’s a wonder they get anything done. It’s the irony of the post-industrial age – organisations built with the aim of turning people into machines actually transform them into unproductive nuggets.

OK, I still have to use the loo. But it’s not so far away, and I never get waylaid by someone asking me about some ludicrous PowerPoint presentation. I also have to deal with emails and admin – but, as a freelance, all that stuff is much more to the point. The line between productive/profitable and wasteful/pointless is, for me, usually pretty clear.

What I really don’t miss is the politics. Even at the time, I knew all that bickering and backbiting was pointless, but it was practically impossible to avoid being sucked in. Put a few humans in a room and they’ll inevitably start creating factions, alliances and conspiracies. On one level, it’s kinda fun, and it adds spice to the daily grind – but it’s also a major drain on the energy and initiative within an organisation, and the dark side can be extremely dark.

So I don’t mind having no colleagues – especially when I’ve got Twitter, the watercooler you can walk away from. Whenever I want a dose of wit, fellow-pro chat or just downright silliness, I don’t even have to leave my desk.

Of course, I’m not really a sociopath. I do actually interact with other people, most notably my family, for minutes on end every day. And that’s the best thing about working alone – if things go well, you can get everything done with no friction or faffing about, and spend what’s left of the day with the people who matter. Which, in my book, is nearly as good as being alone.