I’m not a proper copywriter.

I started out in publishing. As an editor, I never had to create the raw material for our books, just process it. Text arrived from authors in varying states of dishevelment, and my job was to spruce it up for publication.

Actually writing the words myself was a bit of a shock. Then I realised that I still needed my editing skills – just for my own stuff. As I quickly discovered, the best way for me to create a decent draft was to write something – anything – and then work it into shape.

Writing certainly isn’t ‘writing’ as some people seem to imagine it.

It’s not an inspired outpouring, an intense unburdening or an irresistible force of expression. Yes, there’s the odd moment of clarity. But if you want your everyday writing experience to be that romantic, you’ll be waiting a long time.

In my experience, a great piece of writing can no more ‘flow’ from a writer than a symphony with dozens of instrumental parts can spring, fully formed, from a composer.

Writing is more like sculpture, chipping away everything that isn’t the statue. Or maybe it’s like negotiating a maze, never knowing quite where the exit is. Either way, there are no short cuts, and it’s about sustained concentration as much as flashes of inspiration.

‘Writing is easy. You just sit at your typewriter and open a vein.’

Quotes like this don’t really help. At least, I don’t think they help commercial writers. Maybe they help poets.

While there may be times when you need to let your emotions flow – to empathise with the buyer of a product, for instance – that mindset won’t carry you to a finished draft.

Hemingway famously said ‘write drunk, edit sober’. But he didn’t necessarily mean that we have to be physically intoxicated before the words will flow, or that editing was a dull, second-rate job that could safely be done with a hangover.

You can be drunk on beauty, humour, mystery or whatever else gives your writing its soul. But that animating spirit must pass through the ‘sober’ rewriting phase before it can manifest for your readers. The clay has to be fired, as well as formed, before it can be used.

Making it look easy is the hardest job of all.

Whenever you read something that’s so perfectly expressed you feel it’s coming straight from the writer’s mind, you can bet they spent hours, if not days, obsessively honing it. And that they started with a draft that was just as messy, vague and disordered as any first draft of yours or mine.

Because I am 42 years old, one of my favourite albums is Peter Gabriel’s So. It has a sound that’s warm, organic and spontaneous. But that relaxed feel was actually achieved through obsessive studiocraft, sifting and splicing the best bits from dozens of takes.

Gabriel saw this granular, incremental working method as a strength, not a weakness. He called it the ‘tortoise effect’. All that painstaking revision didn’t mean that his music was weak, or that he wasn’t confident in it. It was just what he needed to do for the result he wanted to get.

To find the right way, we have to take a lot of wrong turns.

Is there anything more dispiriting than a blank page?

Yes, there is actually.

An otherwise blank page with a single crap idea on it, that you’ve just written, after an agonisingly long period of thought. 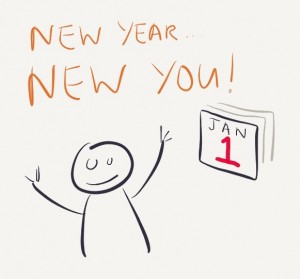 Sometimes, very rarely, it’s a case of ‘first thought, best thought’. Your instincts take you straight to the destination before your intellect can pull you off course. Far more often, though, your first ideas will be derivative, obvious or just dull.

The good ideas are over there, behind the bad ones.

By getting the weak ideas out of your system and onto the page, you clear the road for the strong ones to come through. In self-help language, you ‘get out of your own way’. Success lies on the far side of failure – and, of course, there is no such thing as failure, only feedback.

Suspend your embarrassment. Remember, no-one has to see this stuff. You’re not on the dancefloor, you’re getting ready to go out – and you can try on as many outfits as you like.

Making a start is crucial. You get your hands dirty; you begin to work the clay. Forget the destination for the moment; just to be out on the road is enough.

Suddenly, you have power. The brief is no longer daunting and monolithic, but something you can engage with on equal terms. You may not have conquered it, but battle has been joined.

Any problem can be solved if you spend enough time with it. You could compose a symphony, as long as you spent long enough learning and practising. And writing is exactly the same – the longer you sit with a brief, the closer you get to the ideal answer to it.

Online marketing wisdom often emphasises producing content in particular quantities, or to certain timescales. But you might get a better return on your time investment – that is, more popular content – if you comb through that blog post (yet) again and see how you can improve it, rather than just bunging it out and starting on a new one.

You are not a robot.

Writing is more than the conscious effort to shovel words. Before you can improve a piece of writing, your unconscious mind has to process the symbols and structures that lie beneath the surface of language, finding new ways to break them down or fit them together.

Your brain isn’t a computer, so this process can’t be rushed or forced. It’s also very much affected by your mood, your surroundings and your physical state.

If you can, it’s always worth sleeping on your draft, or at least working on something else for a bit. While you sleep, your unconscious will work. Don’t be surprised at what comes out the next time you sit down to write.

If you’re a freelance, you might want to keep this in mind when proposing a timescale to your client. Even though you’ve got Monday free, your brain might need until Wednesday to come up with the best answer.

If you really can’t take time off, a change is as good as a rest. Give your brain some different food – a view of trees, the smell of coffee, the sound of birdsong. Laptops were invented for this. Personally, I find running invaluable.

Sometimes, revising on your own can feel like being stuck in a tailspin. To jolt yourself out of introspection, stick some new stuff in your head and give it a shake. Every time I open The Copy Book, I get an idea (one of my own, not a stolen one). But almost anything will work. Watch a film, read a book, listen to music. Deliberately choose something unrelated to the brief. Get as far away from the work as you can, and see what’s in your head when you come back.

Writing takes as long as it takes.

The graph of ‘time’ against ‘quality’ is a curve. Whatever tactics you use, diminishing returns will soon set in, with each successive revision delivering a smaller improvement. 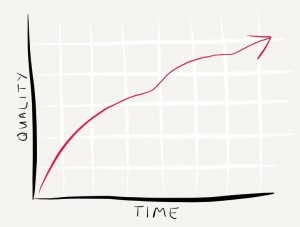 Beyond a certain point, you’ll find yourself beset by uncertainty, going back on your own changes and unable to see the wood for the trees. If it’s a commercial job, you’ll probably have spent more hours than you budgeted for. Sooner or later, for whatever reason, you’ll reach the point when you can make no more improvements. And then, when you’ve finished rewriting, you’ve finished writing.

I hope you don’t find all this dispiriting. It’s not meant to be. In fact, it’s meant to be liberating. The feeling that you have to get it right can be oppressive. By giving yourself the time and space to explore, rework and make mistakes, you give yourself permission to do the best writing you can do. And if this post helps anyone do that, I’ll be happy.