Howzit’s brand proposition is ‘wine crafted by men for men’. Its home page features a button marked ‘I am a real man’ that lets you in, while another marked ‘Ladies, Enjoy Shopping!’ leads to a Google search for ‘shopping’.

Non-imaginary men proceeding past this point arrive at a brand positioning statement headed ‘Are you man enough for this wine?’

You prefer dry-aged prime rib to tofu sausages? You read Playboy instead of Vogue? And your steak comes from an open fire and not out of a microwave? If you answer these questions with a straight forward „Yes!“ then Howzit is going to be your wine of choice.
…
A wine for real men. Meaty, full-bodied, spicy, with distinctive notes of dark berries. Easily accessible but with a punch – wine at its best! This bold Shiraz from Stellenbosch goes perfectly with grilled steaks and burgers. Bring this wine along to your next BBQ and the beer will stay in the fridge. That’s a promise!

It’s obvious that English is not the writers’ first language. But it’s equally clear that the tone hasn’t been lost in translation. They mean it.

The proposition seems to have begun with the wine itself and the fact it goes well with meat. That’s been blended with ‘real men eat meat’, filtered through the laddish values of the company’s four (male) founders and decanted to give the ‘men only’ messaging.

Leaving our morals at the door for the moment, let’s look at this approach as marketers. Will it actually work? 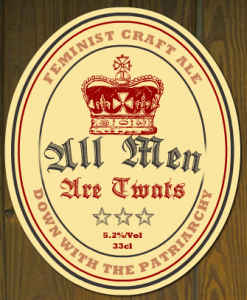 Firstly, I think we can be confident that absolutely zero women who’ve read this copy will buy the wine. It would be like a bloke thoughtfully picking out a craft ale called All Men Are Twats. Not only that, non-buying women are fairly likely to head straight to social media and slag off the brand – although the firm might cynically welcome that, of course, if it believes that all publicity is good publicity.

Some men (NOT ALL, obviously) will love this stuff, and maybe even whip up a bit of ladbantz of their own about it as they stand around the barbecue. At last, they can enjoy the wine they’ve always longed for, while endorsing both ‘what about the men’ and ‘real men’ horseshit. In that sense, the copy could work.

But let’s not be too patronising about this, too mechanistic. Meaty, full-bodied male chauvinists might be thick, but they’re not stupid. They’re not going to get into wine just because some copy arbitrarily links it with something else they like, like repulsive charred pigmeat. And tilting at cold beer seems optimistic at best, quixotic at worst.

Even if some men do buy in, gaining their loyalty this way runs the risk of becoming a toxic brand. It means falling in with the whole silenced-majority, say-the-unsayable, PC-gone-mad narrative that seems to be permeating UK culture these days, as embodied by Jeremy Clarkson, Nigel Farage, Katie Hopkins and (astonishingly) Trevor Phillips. It means forsaking the holy legacy of Bernbach, Ogilvy and Gossage and deciding that you’d rather just be a professional troll.

‘Who cares, if the wines sell?’ you ask, ice-hearted capitalist reptile that you are. Well, one problem is that no-one buys alone. Believe it or not, lots of men do care what women think – so while they might be OK with a ‘just for men’ wine, they’d still feel uneasy if it went out of its way to insult women.

Other men – the really nice ones, like me – know that discrimination hurts everybody, not just those discriminated against, and would therefore want no part. Such men are vanishingly rare, but if you find one, for heaven’s sake, cherish him.

Then there’s a practical point about domestic gatekeepers. With 80% of home-drunk wines bought by women (thanks @Swissss), do you really want your brand telling them to toddle off down Jones Bootmaker while the men sink a few, er, Shirazes? If you must use gender, you might shift more product with a ‘wine your man will love’ angle.

There’s focusing on your market, there’s ignoring irrelevant prospects and there’s being gratuitously offensive. In my view, this marketing goes way too far, to the point where the negatives outweigh the positives. ‘Wine for men’ could be a viable approach – but here the misogynistic, anti-veggie, pro-soft-porn stuff completely torpedoes it.

The irony of all this, of course, is that wine is already ‘for men’. Of the 228 global wine personalities listed at Wikipedia, just 29 – less than 13% – are women. This is hardly an industry where men’s needs are being marginalised, their voices cruelly ignored. But spoilt kids only want the toys they haven’t got.

Even if we accept that this tactic might work, is it right to use it?

In theory, there’s nothing wrong with knowing your niche. We might write an ad aimed at kids, gardeners or whoever, and nobody would complain. And anyway, what if we wrote an ad that sucked up to women and insulted men? If that would be OK, why is this so bad? It’s all sexism, right?

Unfortunately for those who gleefully deploy such reasoning, it is based on false equivalence. A pro-woman-anti-man ad is an interesting thought experiment, but if you try actually writing one, you will come up with a joke or a parody (possibly a very funny one, like the famous Old Spice ad). That’s because the idea of powerful women and downtrodden men is a fantasy that flies in the face of how society actually is.

A pro-man-anti-woman ad, on the other hand, is very much in tune with the prevailing inequality, rape culture, street hassle and body shaming that women have to deal with day in, day out.

That’s also why it’s harder to claim that this sort of thing is meant in jest. After all, we could put all sorts of offensive opinions out there and then say ‘just a joke!’ to avoid the consequences. And perhaps the person on the receiving end of the joke should have at least some say in whether it’s funny or not.

Targeting ads across lines of inequality is not morally neutral; it raises very real questions of power and responsibility. There’s no privileged meta-discourse that stands above, beyond or outside society. Everything is complicit – not just ads, but websites, films, jokes, this blog post. Every time we write, we have a choice between ‘punching up’ or ‘punching down’ – challenging existing power structures or endorsing them.

Unless you are a rampant anti-feminist, sexist writing definitely constitutes punching down – as, arguably, does ‘real man’ (i.e. borderline homophobic), pro-porn or anti-vegetarian sentiment. It’s all about using power against the disempowered.

Though far less significant, this issue remind me of the free-speech controversies over Charlie Hebdo and Dapper Laughs. Yes, you can publish cartoons of Mohammed or crack rape gags, if you really must. No, I do not want to ‘silence’ you, nor do I condone violence against you. I am just saying that there’s always a choice to be made, and that some choices are more helpful than others, and I would rather you chose the more constructive path. That’s all.