What does Sky’s slogan,

actually mean? I’m not really sure, but to make sure I wasn’t being deliberately obtuse, I asked my Twitter feed what they thought. Here are some of the answers (not all serious, natch): 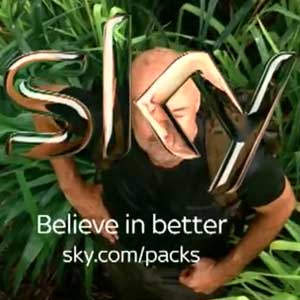 I can't believe it's not better

The range of answers confirms that, while it may or may not be effective, the slogan is certainly ambiguous. In my view, the meaning is unclear because the language is deliberately unfamiliar and clunky.

A similar effect is achieved with Bupa’s current slogan: 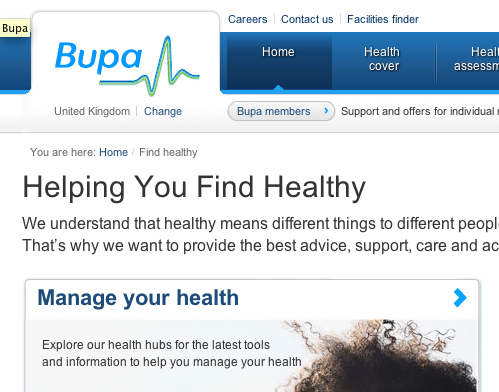 I didn’t ask for views on this one because I think the meaning is clearer, but it’s still been twisted slightly out of shape with unorthodox language. (In passing, note that Bupa are using the clichéd ‘we understand/that’s why’ ploy that I highlighted in this post – perhaps to redress the balance?)

Both this and the Sky slogan create a jarring effect by using adjectives as nouns, which is disorientating. We believe in fairies or democracy, but not ‘better’. We need help finding our car keys or a way forward, but not ‘healthy’.

‘Better’ and ‘healthy’ are positioned as nebulous metaphysical states that we can aspire to; the diffuse language creates (or tries to create) the impression that there’s something special or amazing about watching telly or buying health insurance.

And this is, of course, part of the seemingly endless trend for brands to be more soft and friendly, sucking up to customers and wheedling their way into their lives at every turn. Social media’s got a lot to answer for.

Another example is put forward by copywriter Kevin Mills, in his post Stumbling over copy. He cites an outdoor campaign by Fitness First featuring the line ‘Our members are fitter than yesterday’.

As Kevin notes, this is a very unfamiliar phrase. To me, it sounds like it might have been translated from French. Again, this leaves the reader slightly disconcerted and uncertain, just as they might be if a non-native English speaker came up and asked the way to the station of trains. The meaning is clear, but it’s been expressed strangely – which means the impression that stays with you is strangeness, rather than the benefit of being fitter.

As they stand, these three phrases are classic cases of things that get written, but would never be spoken aloud:

However, these brands aren’t going for a Ronseal-style vernacular vibe. Instead, they’re aiming for differentiation through language – using unusual construction to imply that they themselves are exceptional.

Does it work? Does the unusual slogan stick in the mind – and does that lead to a sale?

In his post, Kevin suggests that using an unexpected or unusual phrase could make an ad more memorable. I think much depends on whether it gets ‘filed’ in the zone of the reader’s mind you want it to – whether it goes in a mental category marked ‘curiosities’ rather than ‘things to buy’ or ‘things to find out more about’. My worry would be that an unusual construction would just be deleted from the reader’s consciousness because it didn’t fit the rhythm and tone of their internal monologue.

It would be easy enough to discover, with A/B testing, which slogan produced a stronger response. However, with the Sky and BUPA examples given above, I’m not sure that a desire to be understood, or even to drive sales, is centre stage. We’re in the realm of brand-building here, where the overall impression is more important than the immediate real-world result. (With Fitness First, there’s a strong suspicion that the effect is the result of carelessness rather than strategy, as Kevin notes. Of course, a campaign might still be good by accident.)

The Sky slogan, interestingly, was explicitly oriented towards internal marketing as well as external – generating an ethos and vibe within the organisation as well as outside it. It’s Sky’s own staff who are exhorted to ‘believe in better’ too.

However, I think there’s another important audience: other marketers. Whenever a campaign has a flavour of wilful differentiation, there’s always the suspicion that the client has got a bit bored of their own marketing, perhaps even embarrassed by it, and wants something out there they can really feel proud of. Something clever, edgy and modern. And what better way to signal your superior intelligence than with words that no-one’s ever spoken, or even thought before?